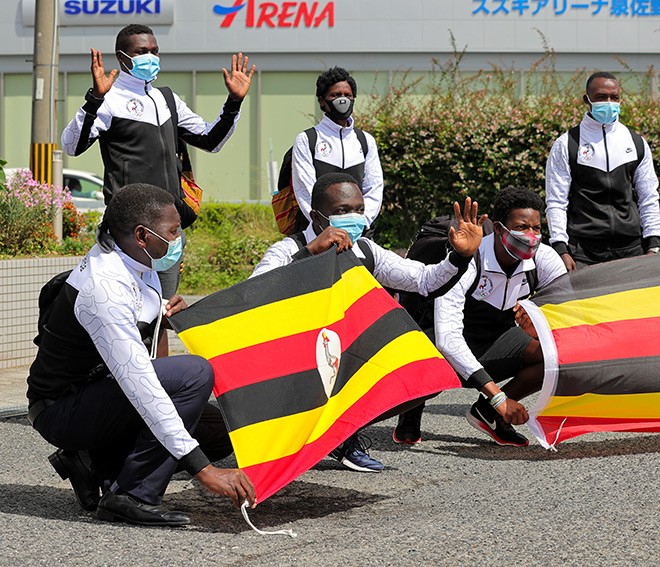 Uganda’s Olympic team members arrive at their hotel in Izumisano, Osaka Prefecture, and wave to reporters on June 20. (Jin Nishioka)

IZUMISANO, Osaka Prefecture--A second member of Uganda's Olympic delegation has tested positive for the novel coronavirus after the team was allowed to travel to its host city here despite a team coach testing positive at Narita Airport.

Izumisano officials announced June 23 that a Ugandan athlete in their 20s tested positive for the virus through a polymerase chain reaction (PCR) test on June 22.

The coach was found to be infected after a PCR test at the airport outside Tokyo on June 19 when the team arrived in Japan.

The fact that the team was permitted to leave the airport afterward has incited criticism from lawmakers and heads of local governments, questioning if the anti-virus border control measures and “bubble” promised by the Tokyo Olympics organizers to contain infections are working.

Osaka Governor Hirofumi Yoshimura on June 22 said that the rest of the team “were supposed to be kept at Narita.”

Izumisano Mayor Hiroyasu Chiyomatsu said that day that the airport's quarantine officers should have identified who had been in close contact with the coach at an early stage.

Izumisano's prefectural health center has begun trying to determine who came into close contact with the athlete who tested positive.

City officials who traveled to Narita Airport to welcome the team have been ordered to self-quarantine at home.

The delegation of nine arrived at Narita on the evening of June 19. Despite all members having all their required documents and vaccination records, the coach's PCR test came back positive.

The remaining eight tested negative in antigen tests, but quarantine officers did not check the members to ascertain if they had been in close contact with the coach during the long flight to Japan.

The team was allowed to leave and arrived at a hotel in Izumisano, their pre-Olympic training camp site, on June 20 by chartered bus.

They have been self-isolating in the hotel, subjected to daily PCR testing, according to the city.

City officials announced June 22 that the eight members and a city employee who accompanied the team from Uganda were identified as having had close contact with the coach and will have their health monitored constantly until July 3.

For daily PCR testing, city officials give a testing kit to the team and collect samples from its members.