EDITORIAL: Top court ruling on use of dual surnames kicks issue back to Diet 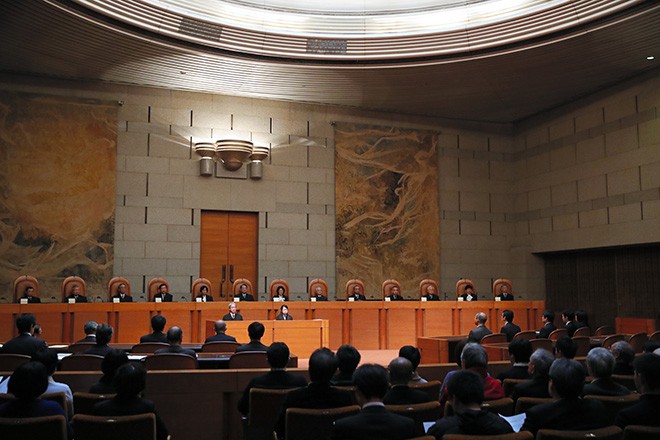 The Supreme Court’s latest ruling on a legal provision that requires married couples to register under the same surname has cruelly dashed the hopes of many couples who want to use separate family names.

The decision is unacceptable for those who have been longing for judicial relief to their frustration.

In a ruling handed down on June 23, the Supreme Court’s Grand Bench rejected the argument made by three couples in Tokyo who claimed that the single-surname rule, stipulated in the Civil Code and the Census Registration Law, violates the Constitution, which guarantees legal equality and freedom of marriage. The top court declared the provision to be constitutional.

The couples brought their case to the court after their marriage registrations were rejected in February and March in 2018, when they checked the boxes for both their family names instead of choosing just one in the application forms.

In its previous ruling on the issue delivered in December 2015, the Supreme Court’s Grand Bench upheld the constitutionality of the rule. In its latest decision, the court said there were no reasons for changing its judgment despite changes in society and the people’s perceptions with regard to this issue.

It said the provision was not unconstitutional at the time when their marriage registrations were rejected.

The ruling has raised many questions.

Four of the 15 justices who heard the case declared it unconstitutional. In their minority opinion, the four justices cited a further increase in the number of working women in Japan as well as the fact that a growing number of women are opting to use their maiden names for business and other purposes as a sign of the law being at odds with reality.

They criticized the single-surname rule as a form of “unreasonable intervention (in private affairs) by the state” and “disrespect for the dignity of individuals.” Their minority opinion better reflects the reality and is far more convincing.

The 11 justices who accepted the constitutionality of the provision did not do so without reservation.

The ruling pointed out that the question of what kind of system should be adopted concerning the surnames of married couples and the judicial decision on the constitutionality of a legal provision concerning the issue are two things “in different spheres.”

What the system should be is an issue that “should be debated and judged by the Diet,” the ruling added. Three of the 11 warned in their supplementary opinion that the provision “could be adjudged to be unconstitutional depending on circumstances” and called on the Diet to constantly monitor related changes in society and the people’s views and make due responses to them.

The ruling underscored afresh that the ball is in the court of the Diet, which is “the sole law-making organ of the State.”

Because of this outdated rule, many people, mostly women, have been forced to change their surnames when they got married. This can cause inconveniences and disadvantages in the social lives of these people. The system has also long been regarded as detrimental to the sense of identity.

When they unwillingly opt for a de facto marriage, such couples face various disadvantages including ineligibility for tax benefits such as a marital deduction. The legal provision that requires married couples to adopt the same surname, almost the only one of its kind in the world, has become a source of serious injustice.

A quarter century has passed since the Justice Ministry’s Legislative Council proposed a revision to the Civil Code to allow married couples to register under separate surnames.

Debate on the issue gained traction for a while, but has gone nowhere in the face of obstinate opposition within the ruling Liberal Democratic Party. The party forced changes in the government’s plan to promote gender equality announced late last year to tone down a call for progress on this issue.

Carefully reading the ruling leaves no doubt that it would be grossly mistaken for champions of the current system to take it as the top court’s endorsement of the rule and feel reassured.

The Diet should realize that its stance toward the issue has been severely called into question.