A lawyer and petitioners seeking a dual-surname system for married couples speak to reporters on June 23 after the Supreme Court dashed their hopes. (Video footage by Wataru Sekita) 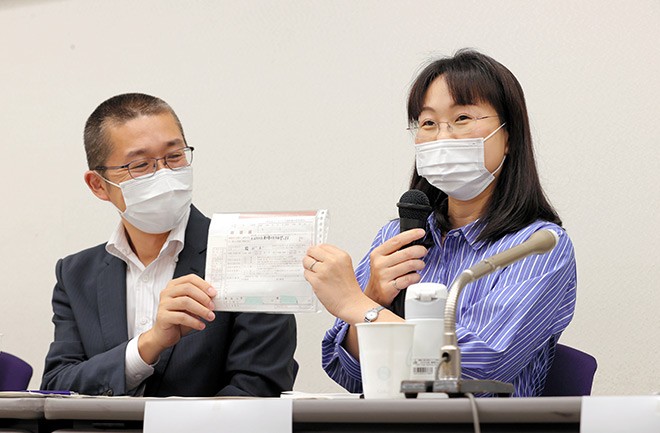 A couple in a de facto marriage hold up the marriage report they would have submitted to a local government office if the Supreme Court had ruled the same-surname provision was unconstitutional. (Wataru Sekita)

The male-dominated Supreme Court dealt a double-blow to couples who want to retain both surnames after marriage.

Not only did the top court’s Grand Bench rule--again--that legal provisions requiring married couples to use a single surname were constitutional, it also said--again--that the issue should be settled by the Diet, not the courts.

The current Diet is largely controlled by the Liberal Democratic Party, whose conservative members have repeatedly blocked efforts on allowing dual surnames for married couples.

But there is a glimmer of hope for couples who want to keep their surnames after marriage.

Although the Supreme Court’s ruling on June 23 echoed its 2015 decision on the matter, much has changed over that six-year period, at least outside the court and the LDP.

Public opinion has increasingly grown in favor of a dual-surname system. And opposition parties as well as the LDP’s junior coalition partner, Komeito, said they would make the issue a prime plank in their platforms for the Lower House election that must be held by this autumn.

“A decision that matches the times should be made, given the spreading understanding among the public” on allowing married couples to use dual surnames, Yuzuru Takeuchi, Komeito’s policy chief, said at a June 23 news conference.

Prime Minister Yoshihide Suga’s predecessor, Shinzo Abe, had long expressed strong opposition to married couples using different surnames. During his reign as the top leader that started in December 2012, very little discussion was held within the LDP on the issue.

Hopes that the tide might change emerged after Suga took over in September 2020. He had previously indicated a willingness to consider making changes about the use of surnames.

But those close to Abe fiercely resisted a proposed plan for allowing greater equal participation regardless of gender, and the wording in a previous version about selective surnames for married couples was deleted.

With those traditionalist elements continuing to hold clout, it appears unlikely that the LDP will change its stance anytime soon.

The three main opposition parties of the Constitutional Democratic Party of Japan, the Japanese Communist Party and the Democratic Party for the People have all said the surname issue would be included in their campaign platforms for the Lower House election because that would allow them to clearly set themselves apart from the LDP.

In the 2015 Supreme Court ruling, five justices dissented from the majority opinion. Only four did so in the June 23 decision.

One of the dissenters in the 2015 ruling was Yoshiki Yamaura, who has since stepped down from the Supreme Court and now works as a lawyer.

He pointed to the small number of female justices as a major reason for the court’s reluctance to squarely address the inconveniences faced by women, who are usually the ones who change their surnames after marriage, even if they have an established career.

Only two of the 15 justices now sitting on the Supreme Court are women.

Yamaura also praised the four justices who wrote dissenting opinions this time around.

“Those views were more compelling,” Yamaura said. “If the 15 justices are considered as stage actors, the performances of those who dissented were much more inspiring.”

One dissenter was Mamoru Miura, the first justice who formerly worked as a prosecutor to express the view that the legal provisions on same surnames were unconstitutional.

Miura rejected the reasoning laid out in the majority opinion.

He wrote that the one-name provision was a clear rejection of any marriage between couples who do not use the same surname, and described it as “a direct restriction” on marriage.

The majority opinion only said such provisions were an indirect restriction that had no limitation on marriage itself.

The majority opinion also said the Diet should resolve the issue because “the matter should be left up to the democratic process.”

But Miura challenged that reasoning, writing that “it is not appropriate to leave a matter related to guarantees under the Constitution, such as restrictions on freedom of marriage, to the democratic process.”

He argued that it was up to the courts to make such decisions.

Miura also touched upon the overwhelming majority of women who have to change their surnames after marriage, the increasing percentage of women who hold jobs, as well as the rising number of married couples in which both spouses work.

He said that under these circumstances, legal stipulations forcing a change in surname put women at a far greater disadvantage.

Miura also pointed out that the Justice Ministry’s Legislative Council had issued a recommendation in 1996 about establishing a system in which married couples could choose the surname they used.

“Although more than a quarter of a century has passed, there has been almost no specific discussions or consideration in the Diet,” Miura wrote.

Two other dissenting justices co-wrote an even more blistering criticism of the current situation.

The opinion written by Yuko Miyazaki, a former lawyer, and Katsuya Uga, a former legal scholar, said the same-surname provision meant that one party in a marriage would always have to bear a greater burden because they would, in effect, lose their identity.

They added that Article 24 of the Constitution was being violated because the same-surname provision amounted to inappropriate interference by the state “that restrains the expression of the will of those entering into marriage and upsets freedom of marriage.”

They also noted the 2016 recommendation by the United Nations for Japan to revise the same-surname provision in line with the international convention to eliminate all forms of discrimination against women.

It was the third such recommendation issued to the Japanese government, and it represented strong evidence for the unconstitutionality of the same-surname provision, the justices wrote.

He said such manners were part of traditional culture along with local dialects and seasonal events.

“It is difficult to say that using the authority of laws to maintain that traditional culture is an activity that leads to constitutional order,” Kusano wrote.