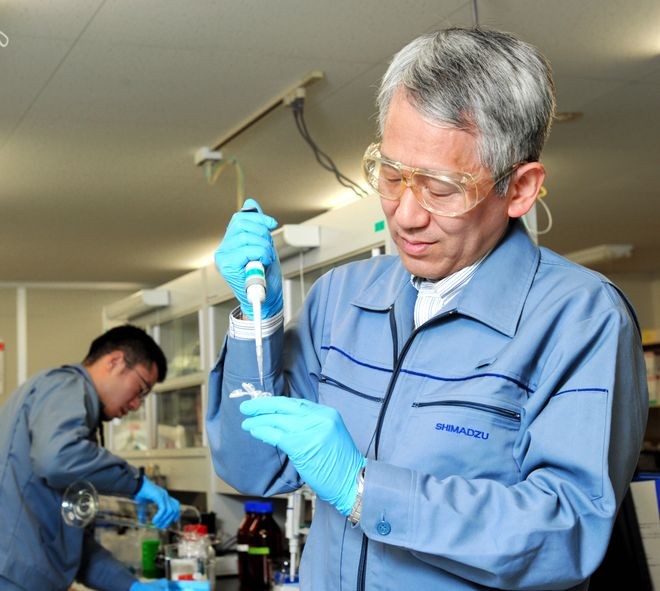 KYOTO--Shimadzu Corp. applied research pioneered by a Nobel laureate to develop a non-invasive system to help diagnose Alzheimer’s disease with just a few droplets of blood.

“This is the world’s first system to measure a biomarker for Alzheimer’s disease in blood,” said Koichi Tanaka, now an executive research fellow at the Kyoto-based precision instrument maker.

“As only part of the whole mechanism of dementia is understood, we will continue to improve the system in the hope of contributing to figuring it out.”

In 2002, Tanaka, 61, shared the Nobel Prize in Chemistry with two others for developing a new method for mass spectrometric analyses of biological macromolecules.

Alzheimer’s, an incurable, progressive neurodegenerative disorder, is said to account for more than half of all dementia cases.

The disease is characterized by the accumulation of a protein in the brain called amyloid beta.

Measuring the cerebral level of amyloid beta is helpful in making a positive diagnosis and determining the gravity of symptoms.

Typically, this is either done through a radiation-based method known as positron emission tomography (PET) or using a syringe to extract cerebrospinal fluid from the lower back. Both methods place a heavy physical burden on patients.

Shimadzu’s system relies on a mass spectrometric technique developed by Tanaka to simultaneously measure the volume of a range of substances, allowing a miniscule amount of certain parts of amyloid beta in blood to be detected among the many different substances.

Joint research by Shimadzu and the National Center for Geriatrics and Gerontology in Obu, Aichi Prefecture, showed that the level of those parts correlates with the amyloid beta volume in the brain figured out with PET.

Shimadzu said it should now be possible to estimate the cerebral level of amyloid beta by sampling blood, thereby reducing the burden on patients.

Shimadzu began sales of the system in June. It gained approval as medical equipment in December.

According to guidelines on dementia-linked biomarkers in cerebrospinal fluid and blood, released in March by the Japan Society for Dementia Research and other bodies, data measured by Shimadzu’s system should be utilized as “a piece of supplementary information.”