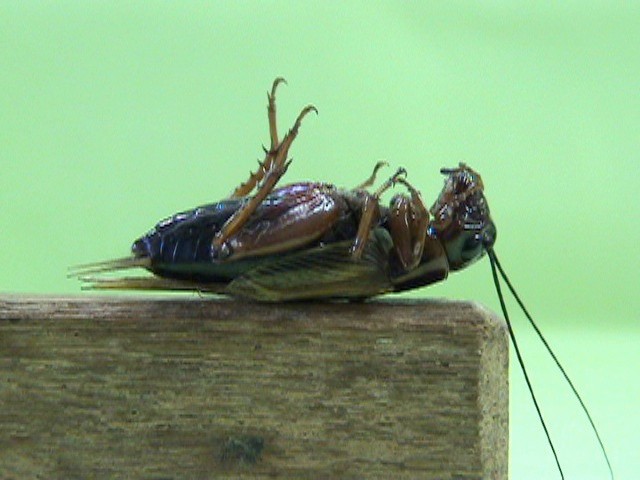 When the cheerful chirping of a cricket abruptly stops, a predator is lurking nearby ... or it’s already too late.

But it is the moment the insect can play dead to avoid being eaten.

Hiroshi Nishino, an assistant professor of neurobehavioral studies at Hokkaido University, examined the behavior known as death feigning with his mentor, Masaki Sakai, professor emeritus of animal physiology at Okayama University, in the latter half of the 1990s.

Nishino, 52, handled countless crickets during his experiments and developed rashes and other allergic reactions, which eventually caused him to abandon his research.

However, more than two decades later, his findings attracted attention and were featured in a recently published academic book, “Death-Feigning in Insects: Mechanism and Function of Tonic Immobility.”

Crickets suddenly stop moving when they are restrained by gently pinning the root of their legs with fingers.

The insects remain motionless even if they are hanging upside down. They will start to move again if left untouched for a while.

Nishino discovered that when crickets try to escape, their leg muscles shiver. This stimulates a chordotonal sensory organ in their legs, rendering their bodies rigid.

When the organ is removed, crickets play dead less frequently.

For example, frogs preying on crickets try to catch live insects when they come into sight.

Crickets under threat flee into rock openings, have their legs restrained and are induced into immobility until the predator loses interest in its prey.

Nishino shows how to cause a cricket to play dead in a video at (https://www.youtube.com/watch?v=C2l5QOUZeto).