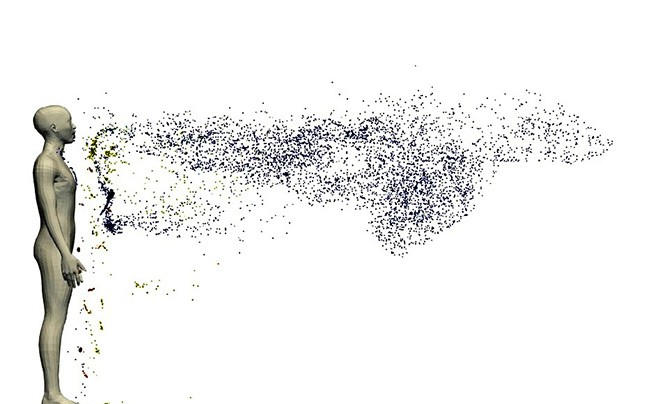 Researchers are cautioning people about how long they converse face to face as a new study suggests coronavirus variants could transmit in a much shorter time through speech than the original virus.

The study was conducted using Fugaku, the world's fastest supercomputer, by the Riken research institute, Kobe University and other universities.

“People should be cautious about how long they converse,” said Makoto Tsubokura, professor of computational fluid dynamics at Kobe University, who led the Riken research team.

Researchers simulated how droplets containing the coronavirus spread in two cases: when an infected person talked at a normal volume and when they spoke loudly.

The findings showed an increased risk of contracting the virus when people were just 1 meter from an infected individual who spoke loudly for 15 minutes.

The researchers estimated the chances of catching the original coronavirus to be more than 20 percent, while the figure is around 30 percent for the Alpha variant and around 50 percent for the Delta virus.

If people were 2 meters away, they had about a 20 percent probability of becoming infected with the Delta variant.

The infection rate sharply declines for any form of the coronavirus when people kept a distance of more than 2 meters from an infected person.

But people should still be careful about conversing over a prolonged period of time, even while social distancing 2 meters apart, the researchers warned.

In the case of the Delta variant, the risk posed over the course of a 20-minute conversation was equivalent to those posed by the original novel coronavirus during a 60-minute chat.

Scientists also simulated the dispersal of droplets at a small restaurant with a counter and tables where 16 people conversed and calculated the risks of contracting the virus if one of them was a carrier.

With no precautionary measures in place, some of the people had a nearly 80 percent chance of getting the virus while for others it was almost zero, depending on their position in the room in relation to the infected person.

People who were seated to the lee side of the air flow, which is the side sheltered from the wind, were more at risk, according to the findings.

When an air conditioner was turned on, droplets containing the coronavirus dispersed more widely. But the overall risk of transmitting the virus lowered as the droplets become less concentrated.

Still, the risks became much higher on the lee side of the strong air flow, the research showed.

Placing panels dividing people at the counter and those seated across the table, combined with turning the air conditioner on, were found to be helpful in reducing infection risks by about 80 percent, compared with no precautions at all.

Panels block droplets and air currents moving upward and downward are created when air expelled from an air conditioner hits the panels, contributing to a drop in risk, according to the research team.

“It is important to prevent droplets from concentrating in a certain area and reduce the overall risks in a room,” Tsubokura said.

A ceiling fan will be effective in reducing infection risks as it circulates the air upward and downward, he added.