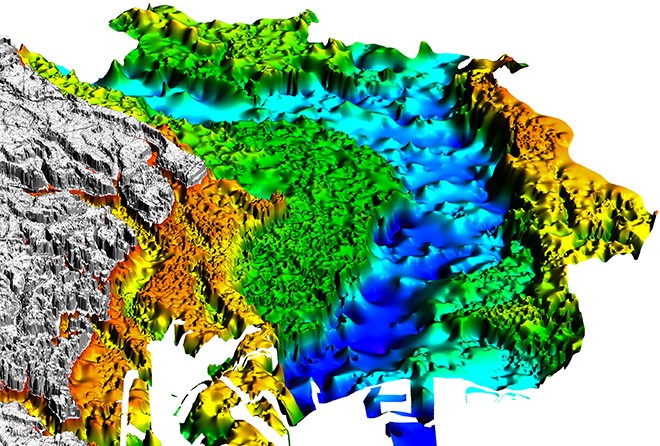 The dark blue areas are where filled-in valleys are the deepest underground in the Tokyo area. (Provided by AIST)

A research institute has released a 3-D geological map showing the underground structure of Tokyo's 23 wards designed to help residents think about weak areas and better prepare for earthquakes.

The map was compiled by the National Institute of Advanced Industrial Science and Technology (AIST) and shows areas where foundations are made up of soft sediment that settled in valleys carved out after the glacial period.

Such areas are more vulnerable to shaking when earthquakes occur.

“I believe those working on construction projects know by experience where the soft soil layers are, but this is the first time it has clearly been shown that sediment filled the valleys created a long time ago," said Tsutomu Nakazawa, who heads the Research Institute of Geology and Geoinformation at AIST. "I hope people will heighten their disaster prevention awareness by learning about the underground structure of where they live.”

During the glacial period about 20,000 years ago, the ocean surface was about 100 meters lower than today. In areas of eastern Tokyo, such as the wards of Katsushika, Edogawa and Koto, deep valleys were carved out by rivers.

The water surface rose from about 10,000 years ago as the Earth became warmer and soft sediment from upriver filled the valleys.

Those filled-in valleys are areas where shaking during quakes is stronger.
During the Great East Japan Earthquake in March 2011, soil liquefaction occurred along the coastal areas, causing major damage to buildings as well as water supplies and sewage systems.

The AIST map was created from borehole data collected from about 50,000 locations and based on studies during civil engineering and construction projects. In addition, AIST also conducted its own borehole studies, and the combined data was used to create the 3-D map.

That analysis led to the finding that filled-in valleys in eastern Tokyo were as deep as 80 meters underground. It has been difficult until now to get an accurate grasp of the geological layers in urban areas such as Tokyo where development has progressed so there was only speculation about how deep the filled-in valleys might be.

Another finding was that areas of western Tokyo known as the Yamanote area also had sections of filled-in valleys. The Yamanote area was considered to have a more solid foundation, but the valleys that were later filled in were apparently carved out during the glacial period about 140,000 years ago.

One section from Yoyogi in Shibuya Ward to Takanawa in Minato Ward was found to have a filled-in valley about 10 kilometers long and 3 to 4 km wide. Another filled-in valley on the northern bank of the Tamagawa River in Setagaya Ward also measured about 10 km long and 1.5 to 3 km wide.

The map can be found at the AIST site at: https://gbank.gsj.jp/urbangeol/.

The latest 3-D map follows one released in 2018 of northern Chiba Prefecture. Further maps of other parts of the greater Tokyo metropolitan area are being planned.