Starbucks to sell special local Frappuccinos in each prefecture 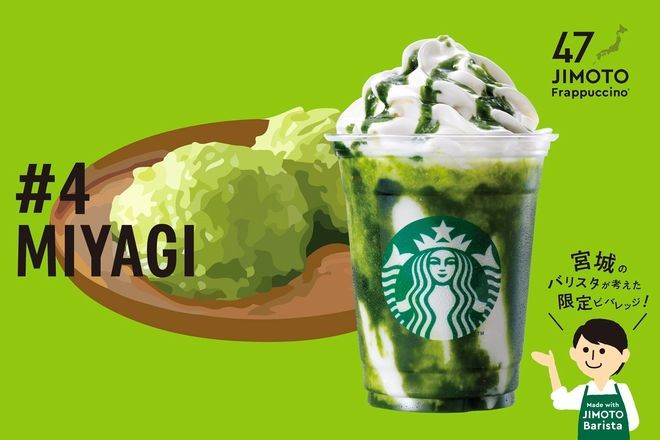 For a limited time this summer, Starbucks Coffee Japan will debut 47 new Frappuccino drinks, one for each prefecture, made with local ingredients such as "Hyuganatsu" citrus and "Kakinotane" rice confectionery.

The Seattle-based coffee chain unveiled its lineup of photogenic frozen drinks, each sold in its corresponding prefecture, to celebrate the 25th anniversary of its first foray into Japan.

Starbucks baristas across the country came up with ideas for the ingredients, presentation and naming of each prefecture’s drink.

By using local products in Starbucks’ signature beverage, the company said it hopes to strengthen its ties with local communities.

The Frappuccino for southern Miyazaki Prefecture uses mango sauce and Hyuganatsu citrus, while baristas in central Yamanashi Prefecture dreamed up a drink featuring grapes, which are a local specialty, and white chocolate cream.

In Tochigi Prefecture, baristas chose to have fun with a natural phenomenon. The prefecture is prone to lightning strikes, so they came up with the idea of replicating the sound and image of lightning by infusing popping candy into a chocolate Frappuccino.

The first Starbucks store in the country was opened in Tokyo’s posh Ginza district in 1996.

By 2015, all 47 prefectures had at least one Starbucks. Currently, about 1,600 Starbucks are operating in Japan.