VOX POPULI: Apple Daily shut down, but seeds of democracy it sowed will grow 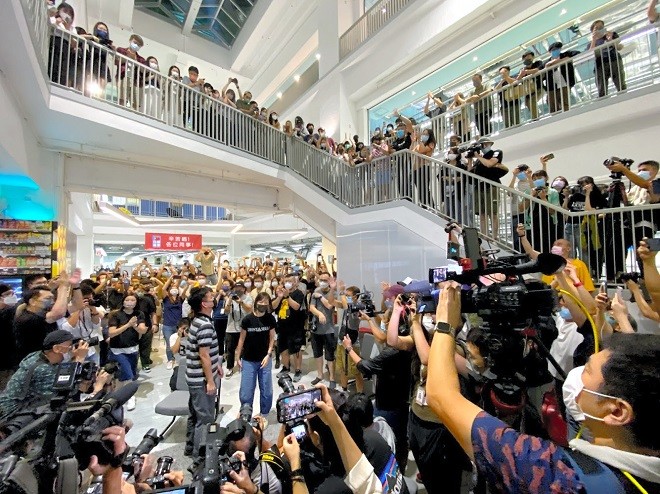 Managing editors and the reporting staff of Hong Kong’s pro-democracy tabloid Apple Daily pay respect to each other with cheers and applause in honor of their work as they finish their final editing late at night on June 23. (Atsushi Okudera)

Concerned for her safety, a superior told her to leave and return, but Chan chose to stay in the disaster areas, where she continued covering news of the tsunami and the nuclear disaster.

“When you are a reporter, you have a bit of an occupational disease, which is you want to be as close as possible to the front lines of news,” she later said.

Apple Daily, Chan’s beloved workplace of 25 years, has been forced out of print.

She contributed a column, titled “A farewell letter to Hong Kongers,” to the newspaper’s last issue on June 24.

“The Apple has been buried in mud, but its seeds will grow into a full tree of bigger, and more beautiful, apples,” part of the article read.

Apple Daily was founded in 1995 by Jimmy Lai, a successful apparel businessman, motivated by the bloody crackdown that had taken place six years earlier in Beijing’s Tiananmen Square.

It remained consistent in its stance, sometimes unflinchingly critical of China’s leaders, even as other Hong Kong newspapers turned pro-mainland under Beijing’s pressure.

It was also one of my favorite papers during my stint as a resident in Hong Kong. Apple Daily enjoyed outstanding popularity in zones occupied by demonstrators during the Umbrella Movement of 2014, when highways of the city were taken over by crowds of young people.

The development in Hong Kong reminds me of Japan’s “Kokkei Shimbun” (Funny times), which was obliged to cease publication as a result of persistent censorial interventions during the late Meiji Era (1868-1912).

Gaikotsu Miyatake (1867-1955), the defiant journalist who published the newspaper, said in its final issue: “(Our newspaper) is valiantly taking its own life at a time when vicious government officials are about to take its life.”

Undaunted, Miyatake went on to start more newspapers and magazines and remained in high spirits well into his later years.

Only one year has passed since an authoritarian law was created to gag Hong Kong’s speech. I never imagined a newspaper that enjoyed so much support among the citizens would be trampled down so quickly.

I am impatient to see the day when the Apple, which went through raging rainstorms and ended up buried, will grow into an opulent tree of ripe fruit again.