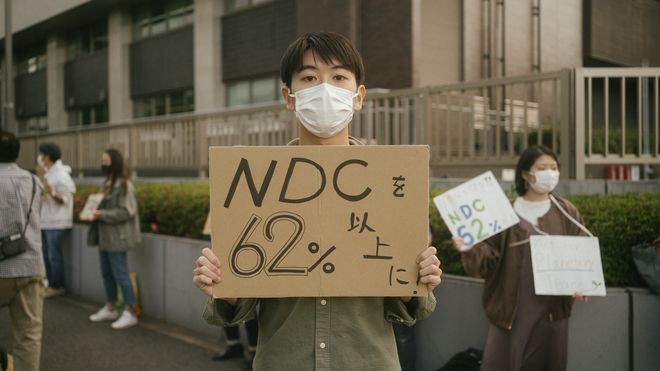 A man shows a sign demanding Japan raise its emissions-reduction target to at least 62 percent in front of the economy ministry in Tokyo’s Kasumigaseki district on April 22. (Provided by Kinkyu Kiko)

Not good enough. That was the message to Prime Minister Yoshihide Suga from young climate activists on the day he officially unveiled the government’s new target for cutting greenhouse gas emissions.

At 67 locations across 23 prefectures on April 22, activists held up placards arguing that what the government drafted falls short on adequately combating climate change.

Kazuto Nakano, 19, and Miu Terashima, 19, marched along a street in Kyoto brandishing a banner that states, “We are demanding the goal for slashing greenhouse gas emissions be dramatically raised.”

Terashima carried a sign around her shoulder that read “62 percent to protect the future of the globe.”

"The government should set a reduction goal that is strict enough to curb the temperature increase to 1.5 degrees or less and take measures toward that goal," Nakano said.

They are insisting the target should be raised to a 62 percent emissions reduction by 2030 from 2013 levels, compared to the prime minister’s target of 46 percent.

Under the harder target, Japan could still adhere to the Paris Agreement goal of limiting the global temperature rise to as much as 1.5 degrees from pre-industrial levels.

Given that global warming will have greater impact on young people and future generations, and that Japan is a major emitter, high school and college students are raising their voices to urge the government and the business community to aim higher.

That same day, a group of about 10 youth and adults appeared in front of the economy ministry building in Tokyo's Kasumigaseki district with placards. Second-year high school student Minori Hirose, 16, said she secured her first day off to join the campaign.

“Unless we stand up, people will think we have given up (on the 62-percent target),” said Hirose. “I want to live in a society where we can go to school without any anxiety.”

Their push to ratchet up the target follows an independent scientific analysis report released in March out of Europe by Climate Action Tracker (CAT).

The report calls for Japan to cut emissions by 62 percent by 2030 from 2013 levels to adhere to the Paris Agreement goal.

When the global thermostat raises higher than 1.5 degrees, humans will have to rely on unrealized technologies, such as carbon capture, to lower the figure to the previous level.

If this happens, it will become increasingly unclear whether global warming can be stopped. That has youth climate activists holding out hopes the government might still come around on the 62 percent target.

In a special report published in 2018, the Intergovernmental Panel on Climate Change estimated that reducing emissions by 62 percent would prove helpful in preventing the temperature rise from far exceeding 1.5 degrees.

The Kiko Network, a nongovernmental environmental advocacy group, is also pressing Tokyo to raise the 2030 target to 60 percent based on the CAT report.

According to the World Meteorological Organization, the global temperature has already risen by about 1.2 degrees. The IPCC predicts it will reach 1.5 degrees as early as 2030.

Young climate activists protested at a coal plant being developed by power supplier JERA Co. in Yokosuka, Kanagawa Prefecture, on April 22, arguing it is necessary for Japan to phase out coal power to be successful in the fight against climate change.

“Completing a new coal power station will help accelerate global warming,” said Hikari Matsumoto, 21, vowing to continue her opposition to coal power. “That is not compatible with the goal of curbing the (global) temperature rise to 1.5 degrees or lower.”

(This article was written by Akemi Kanda and Keisuke Katori.)