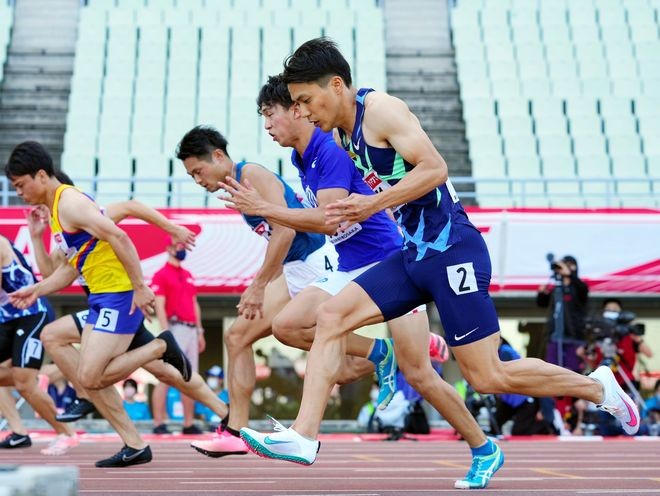 Ryota Yamagata, right, competes in the qualifying round of the 100-meter sprint event in the all-Japan track and field championship on June 24. (Ryo Ikeda)

Nearly two decades of scientific studies have helped Japanese runners shave tiny fractions of a second off their times and finally break the 10-second barrier in the 100-meter sprint.

The analyses on velocity and technique combined with the tireless efforts by the sprinters and their coaches have led to three national records in the event over the past four years.

Yoshihide Kiryu in 2017 broke that mark and became the first Japanese sprinter to run 100 meters in under 10 seconds.

With more Japanese now achieving that feat, much attention was focused on the marquee event at the all-Japan track and field championship that kicked off on June 24.

“Many runners tried to finish the 100 in under 10 seconds for 20 years until Kiryu broke the record,” said Ryota Yamagata, one of the top Japanese sprinters in the event. “Knowledge had accumulated during the period.”

“The 20-year period for amassing know-how had great significance,” he said.

Akifumi Matsuo, a vital dynamics expert who was a professor at the National Institute of Fitness and Sports in Kanoya in Kagoshima Prefecture, has long studied velocity in the 100.

He said the shift into higher gear for Japanese sprinters stemmed from the 1991 world championship in Tokyo.

Matsuo made two discoveries after analyzing the running style of U.S. sprinting legend Carl Lewis, who set a world record of 9.86 seconds at the Tokyo competition.

“One discovery was about his sprint technique,” Matsuo said. “Japanese runners at the time were taught to make a full stretch of their knees and ‘kick’ the ground at every step to accelerate. But Lewis never really fully stretched his legs and did not kick all the way through the race.”

The findings resulted in a drastic change in sprinters’ running method.

Japanese runners realized that “kicking the ground firmly” was not the way to run faster. Instead, they focused more on their pelvic movements to bring their legs forward.

The other discovery was that Lewis’ pace slowed in the end after reaching a top speed, even though he appeared to accelerate toward the finish line, Matsuo said.

In fact, all runners, even current world record holder Usain Bolt of Jamaica, cannot maintain their top speed and slow down before finishing the 100 meters, he said.

Matsuo said his study of Lewis showed that the sprint should be measured in three phases: the rapid “accelerating” stage at the start, the top-speed “intermediate” phase, and the last “slowdown” period.

In general, sprinters reach their maximum speeds after 50 meters to 60 meters.

Scientists came to a theoretical conclusion based on their accumulated research on speed changes of sprinters both in Japan and abroad.

“The element linked most closely to time improvement turned out to be the maximum rate,” Matsuo said. “It’s safe to say a top velocity of at least 11.60 meters per second is essential for running 100 meters in less than 10 seconds.”

Yamagata set his record of 9.95 seconds by hitting 11.62 meters per second.

There are, of course, exceptions. Yuki Koike’s top speed was 11.58 meters per second when he logged 9.98 seconds in 2019. He did not slow down drastically due to his exceptionally quick leg switching.

A reversed example has also been reported.

Nobuharu Asahara, who set the national record three times in the 1990s and had a personal best of 10.02 seconds in 2001, never broke the 10-second barrier.

“His fastest pace was excellent, and a report showed Asahara reached a maximum 11.7 meters or so per second,” Matsuo noted. “But he had a tendency to slow down greatly toward the end of races.”

Much to the dismay of the researchers, similar measurements were unavailable for Ito’s 10.00-second run, which took place at the 1998 Asian Games in Bangkok.

One thing that was never in doubt was that Ito’s stride was as long as those of the world’s top runners.

How to improve the top velocity remains a challenge.

Should sprinters drastically widen their strides by sacrificing the pace of their leg-switching? Or should they try to maintain that pace while lengthening their strides by only a few centimeters?

Athletes and their coaches are currently taking the stance that one style does not fit all.

“We wanted to identify principles common among all sprinters,” Matsuo said. “But we eventually decided that different runners have different answers. Styles are now determined in accordance with the way of thinking of the sprinters and their coaches.”

Still, the maximum speed of 11.60 meters per second is now a common goal among top sprinters in Japan and has formed a basis of their training.