TOWARDS EQUALITY: In Brazil, the fight against domestic violence goes through beauty salons and barbershops 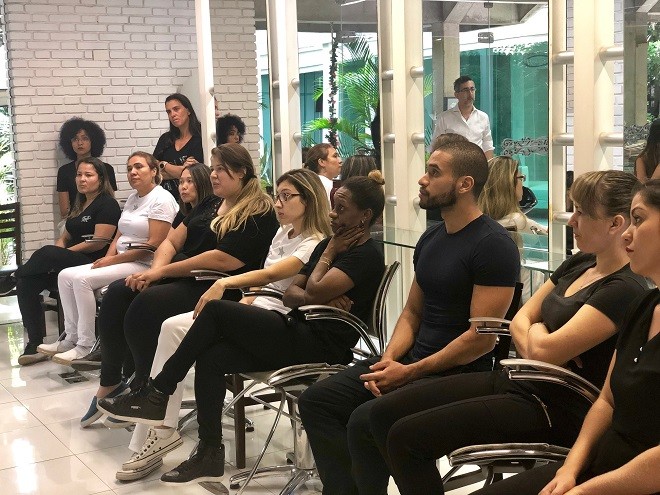 Beauticians from Jacques Janine, a high end salon in Sao Paulo, being trained to stop domestic violence as part of the Maos Empenhadas Contra a Violencia project in 2019 (Julia Zaremba/Folhapress)

The Maos Empenhadas Contra a Violencia (Hands committed against violence) program, created in 2017 in the Brazilian central-west state of Mato Grosso do Sul, trains professionals in beauty salons to identify and help victims of domestic violence. It has trained 272 beauty professionals and expanded to six other states to date.

That same year, an unprecedented action against gender-based violence was initiated in the Brazilian central-west state of Mato Grosso do Sul. Beauty salons’ professionals would get trained by the state’s justice department to identify abuse signs from their customers and encourage them to report the crime and seek help by contacting the Maos Empenhadas Contra a Violencia program. The initiative has so far trained 272 beauticians in the city of Campo Grande and has expanded to seven other Brazilian cities in six states. Now, it is being implemented for the first time in barbershops as well.

“It is another type of conversation, this time to reach men,” says judge Jacqueline Machado, founder of the program. If the goal in women’s salons is to help the victims, the aim in barbershops is to prevent violence in the first place, taking the conversation to those who may be committing abuse.

The first two training lessons for barbershop’s workers were held online during the second half of 2020 because of the novel coronavirus pandemic, which prompted a 431 percent spike in domestic violence cases reported on social media during lockdowns and a 2 percent rise in femicides in last year’s first quarter (compared with the same period in 2019), according to the Brazilian Forum on Public Safety.

In a country that ranks fifth in the world on femicide, with around 40 percent of the victims dying at the hands of family members or people with whom they had an intimate relationship, “men often fear they can be wrongfully accused of abuse,” says one of the program’s brochures used to teach the barbers about feminism and the cycle of violence against women. “They are unaware that certain behaviors are considered violence.”

That is why the initiative hopes to teach the barbers about the origins of sexism and how it affects them, but also to unmask certain common myths about laws aimed to protect women from abuse, such as the Maria da Penha Law. Enacted in 2006, the law established special courts and stricter sentences for offenders, as well as prevention and relief initiatives in cities of more than 60,000 inhabitants, such as shelters for victims. That way, the barbers themselves can start teaching their clients the same.

Renan Silveira, who works at a barbershop called Campo Grande Barber Shop, participated in the second training lesson of the men-oriented program.

“We were invited to take part in the program, and we thought that it was very cool to bring this type of information into the barbershop, which can often be a ‘macho’-type of environment,” he says.

He believes that the training was easier for barbers who were already interested in the matter. “The content of the lessons is great, but I think it is much easier for those who already understand this issue a bit. It would be interesting to have something simple and direct that could circulate on social media.”

Understanding the information available on domestic violence is key for this project to work, both in men’s barbershops and women’s beauty salons.

“The project is focused on education because there are still women who think that if they leave their abusers, they will commit a crime, home abandonment, which doesn't exist,” says Machado. “In the state of Mato Grosso do Sul, the vast majority of the victims of femicide in 2019 were women who hadn’t sought justice, hadn’t filed police reports or had no protective measures in place. We need to get these women into the system.”

So far, she says, the manicurists and hairdressers taking part in the initiative have helped 63 women report domestic violence cases to the police. As victims might skip mentioning the program when filing a complaint, the figure could well be much higher.

Altogether, the 50 partnering beauty salons have the potential to reach roughly 22,000 customers each month.

“The other day, one of our clients started crying in the salon. The worker who was with her said nothing, she just handed the magazine [a booklet created by the Mato Grosso do Sul justice department in which women can find information about domestic violence and a list of places for victims to seek help] to the girl, and she took it,” says Andreia Sousa, owner of a beauty salon in Campo Grande.

Her 10 employees have all taken the program’s lessons, she says, thanks to which they were also able to help a colleague who started working at the salon after the training to get out of a violent relationship.

Since its launch in Mato Grosso do Sul, the Maos Empenhadas Contra a Violencia program has been also adopted by the state's justice departments of Sao Paulo, Piaui, Para, Rio Grande do Sul, Parana and Rio de Janeiro. The barbershop version has also been replicated in Pernambuco.

But the initiative has its limitations, says Brazilian feminist lawyer Isabela Del Monde.

“It is worrying that government officials launched this project to help individuals,” she says, adding that such initiatives are imbued with good intentions, but they cannot replace more robust public policies to improve the victims’ care and to reduce violence rates. “It is beautiful to save a woman's life. But what about the other millions that exist?” she says. “You need public investment to improve the entire system. The answer needs to be structural.”