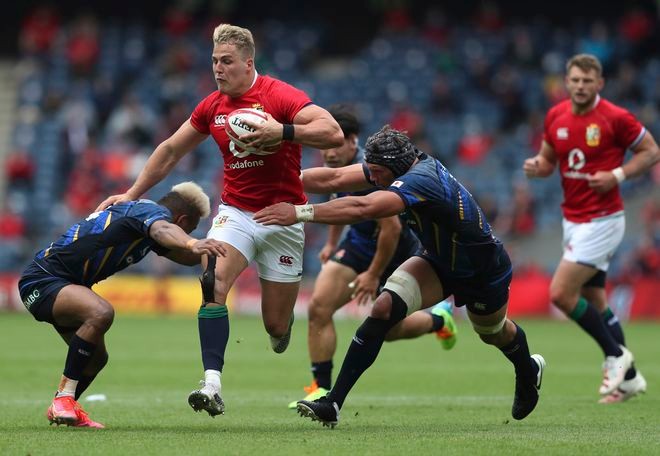 EDINBURGH--The British and Irish Lions beat Japan 28-10 in their Murrayfield warm-up on Saturday, but the match was overshadowed by shoulder injuries that ruled captain Alun Wyn Jones and flanker Justin Tipuric out of the tour of South Africa.

Veteran Welsh lock Jones was forced off after eight minutes with a dislocated shoulder and coach Warren Gatland later confirmed it ruled him out. Later, he revealed that Tipuric's tour was also over with a shoulder injury.

Welsh duo Adam Beard and Josh Navidi have been called up as replacements and will fly out with their new team mates on Sunday. Ireland scrumhalf Conor Murray was named as the new Lions captain.

"Alun Wyn will obviously be a big loss, both on and off the field, but will be ably replaced by Conor," Gatland said.

"Conor is an outstanding rugby player and is held in the highest regard with both the players and coaches. As a three-time Lions tourist, he knows what will be required as captain and I am certain he will lead the squad with excellence."

Jones had played in the last nine Lions Tests, as well as Saturday's game.

The better news for Gatland was that the Lions found their attacking groove early, albeit against some soft defending by a Japan team playing their first Test since the World Cup quarter-final defeat by South Africa in 2019.

In front of 16,500 fans at Murrayfield, likely to be the biggest crowd they will play in front of this summer, the Lions were in control for the first hour of the game, their first in Britain since 2005.

They struck first after 13 minutes when Bundee Aki blasted through and Wales wing Josh Adams took advantage of the space to open his try account.

Scotland's South African-born winger Duhan van der Merwe sneaked round from the back of a ruck for the second try and Ireland center Robbie Henshaw ran in the third, all converted by Dan Biggar to give them a 21-0 halftime lead.

Ireland's Tadhg Beirne got the fourth try 10 minutes into the second half but the home fans expecting a thrashing were forced to think again.

Japan, who warmed up with a match against a club side, had struggled to get any sort of foothold in their first ever game against the Lions and were unable to generate any of the quick possession their livewire backs thrive on.

But as the second half went on they began to link better and make ground and were rewarded when Kazuki Himeno was bundled over from a line-out after an hour.

The Lions were forced to play the last 10 minutes with 14 men after Jack Conan went off injured with all the replacements already on the pitch, and they spent most it defending their line.

"I'm pleased with that result," said man of the match Biggar. "The second half was a bit of a slog as we made some errors. We played some good rugby in the first half and we can use it as a stepping stone.

"We were just trying to do the basics early doors. We just managed it, everything seemed to click. It was great to play in front of this crowd and I want to thank them. It's been awesome."

The Lions play the first match of their eight-game, three-Test South Africa tour in Johannesburg on July 3.