In policy shift, airports to ID those at risk of COVID-19 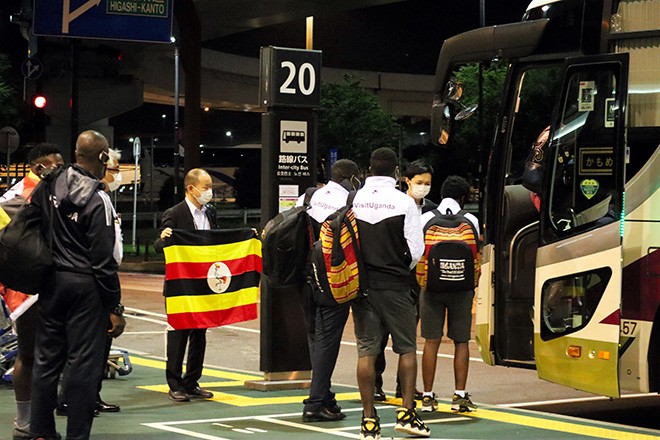 Members of Uganda’s Olympic team board a bus after midnight after they arrived at Narita Airport earlier in the evening on June 19. (Yoshiko Aoyama)

The government and Tokyo Olympic organizers are rushing to tighten anti-virus measures at airports following a ruckus over a Ugandan delegation granted entry into Japan after a coach tested positive for COVID-19 and was quarantined.

They want to be able to identify who had close contact with an infected at the airport if a member of an Olympic delegation tests positive for the novel coronavirus in the future, sources said.

The central government came under fire after the team was allowed to travel to Izumisano in Osaka Prefecture, only hours after the infection of the team member was confirmed during a PCR test at Narita Airport outside Tokyo on June 19.

The government defended its handling of the case, insisting that the task of identifying those in close contact with an infected individual is the sole responsibility of officials of a host community and the local public health center.

The remaining eight team members headed to Izumisano, where their hotel and training camp are located, on a chartered bus without being subject to an inspection to determine who may have been exposed to the novel coronavirus from the infected coach.

In the uproar that followed, the Tokyo Olympic organizing committee decided to assign officials to Narita and other airports to identify those at risk based on aircraft seating arrangements and other information if one or more of an Olympic delegation tests positive in airport quarantine, according to the sources.

As a precautionary measure, those who are identified as having been in close contact will be driven to the host town in a dedicated bus.

There, they will stay at an accommodation facility as local heath authorities decide whether there is any risk of them passing on infection.

Olympic organizers are also considering moving such individuals to a facility designated by its committee, rather than allowing them to travel to a host community, the sources said.

About 100 Olympic teams are scheduled to arrive at Japanese airports over a span of just one week in mid-July, about a week ahead of the July 23 start of the Games.

“We are working to strengthen measures in time for mass arrivals of Olympians from overseas,” said a senior official of the prime minister’s office, adding that a formal announcement of the new safety precautions will follow.

The Osaka prefectural health center later said two bus drivers and five city employees who traveled with the Ugandan team to Izumisano from the airport are deemed to have been in close contact with the coach, in addition to the eight members of the team.

One of the eight team members tested positive on June 23.

(This article was written by Taro Ono and Shuhei Nomura.)