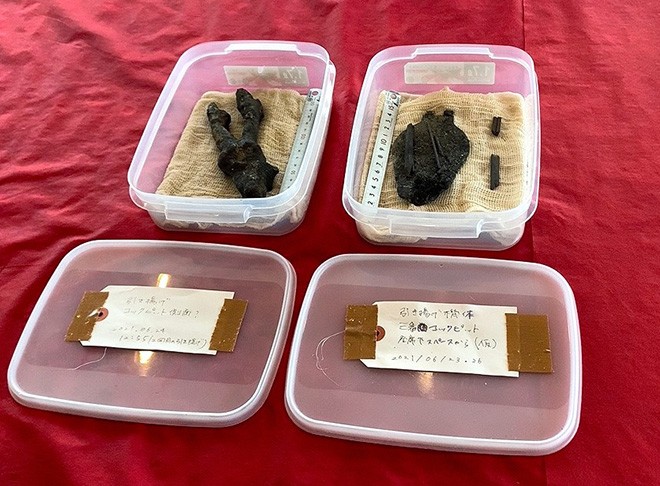 The remnants of a pencil in a box, right, and what appears to be a pair of pincers, from the wreckage of a bomber used by the Imperial Japanese Navy. The salvaged wreckage lay in waters off Tanegashima island in Kagoshima Prefecture. (Junko Kozuma, a contracted reporter)

NISHINOOMOTE, Kagoshima Prefecture--Wreckage of a wartime Japanese aircraft salvaged from the seabed near here yielded no human remains, only a pencil and what appeared to be a pair of pincers, team members said.

As the items bore no names, it is unknown who used them.

Team members who raised most of the plane from a depth of about 20 meters said it was likely a Type 97 carrier-based attack bomber used by the Imperial Japanese Navy.

The model was used for suicide missions in the waning days of World War II.

It was found roughly 300 meters off Cape Kishigasaki at the northern tip of Tanegashima island. It is 8.8 meters long and 7.3 meters wide.

The team, members of the Japan Association for Recovery and Repatriation of War Casualties, mounted the operation in the hope of finding human remains to return to their families.

The project was commissioned by the Ministry of Health, Labor and Welfare, which is in charge of recovering the remains of the war dead.

The salvage work got under way June 15, and the wreckage was pulled to the surface between June 23 and June 24.

According to the ministry, this is the first time to search for human remains after salvaging a sunken aircraft used by Japan's wartime military.

The salvaged plane will be put on display at a peace museum in Usa, Oita Prefecture, which hosted a training site for Type 97 crew members during the war.