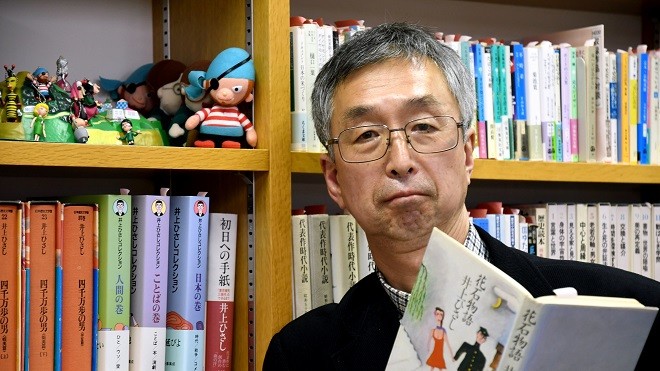 Hisashi Inoue, a member of a regional revitalization program for the town of Kawanishi in Yamagata Prefecture and a researcher of the Chihitsudo Bunko library, on April 29 (Photo by Hideoki Kozuki)

"My life is centered around Hisashi Inoue now," he says. "Doing research on him is like eating meals and washing my face to me."

In late March this year, Inoue the researcher moved to the late author and playwright's hometown, tasked with identifying works by the writer housed in the Chihitsudo Bunko library not yet compiled into books. The project is part of a program to promote Kawanishi based on a governmental subsidiary program for local community revitalization across Japan.

There's a lot to sift through. The library boasts about 220,000 pieces of books and other publications the author donated.

"I'm at the stage of right before opening a treasure box," said Inoue, 60, prior to embarking on his quest.

His fascination with the author dates to when he was 4 years old and watching the children's puppet show "Hyokkori Hyotanjima" in his neighbor's home when he lived in Iwate Prefecture, one of his earliest memories.

What captured his imagination even more than Don Gabacho, one of the show's main characters, popular among children at the time, was the moment he saw the name Hisashi Inoue in the show's credits, listed as its screenwriter.

Inoue began reading the author's books after he started elementary school and loved that they were full of ridiculous ideas.

But the author was so prolific that Inoue found he couldn't afford to buy as many of his books as he wanted. It became his daily routine to visit bookstores and read his works.

"I learned everything through Hisashi Inoue," Inoue said.

He wrote a letter to the author after he enrolled in college, telling him that he wanted to become his apprentice and call himself his heir. But Inoue couldn't work up the courage to drop the letter into a postal box.

After going on to work at a company, a turning point came for Inoue in 2010 when he learned that the writer had passed away. Because the author was a slow writer, many of his series had been left unfinished.

"I wanted to shed light on the full scope of his works not known to anyone," Inoue recalled thinking at the time.

To find pieces written by Inoue, the researcher flips through scores of newspapers and magazines, once spending a week in Tokyo visiting the National Diet Library every day to scour it for material.

Three new books were published last year compiled of essays that he unearthed. A timeline that he constructed of the author's literary works listing them in order of publication dates stretches at least 5,000 lines in length.