Okinawa’s war dead mourned at Cornerstone of Peace in Itoman 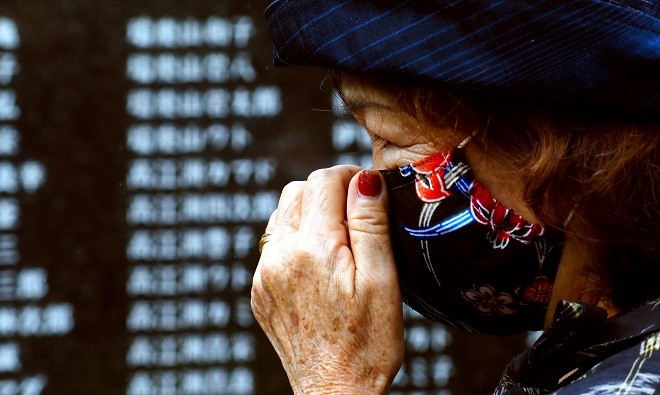 Miyoko Oshiro is in tears on June 23 in front of the Cornerstone of Peace in Itoman, Okinawa Prefecture, on which are engraved the names of her father and her older brother. (Shoma Fujiwaki)

ITOMAN, Okinawa Prefecture--Strong winds from an approaching typhoon did not keep Taro Aragaki from his daily routine of visiting the Cornerstone of Peace here.

Aragaki, 78, was seen tracing the names of his parents with his hand on the monument, on which are engraved the names of more than 200,000 war dead. It stands in the Mabuni district of Itoman near the southern end of Okinawa’s main island.

Aragaki was 2 at the time of the Battle of Okinawa in 1945. His father was killed in the war, and his mother died from undernourishment soon after the war ended.

“The names of my parents being shown here give me moral support,” Aragaki said on the morning of June 5.

On Okinawa Memorial Day, a public holiday in this southernmost prefecture, people were seen visiting the Cornerstone of Peace here from early in the morning on June 23.

Despite the rain, visitors joined their hands in prayer and offered flowers to those who perished in the Battle of Okinawa during the closing months of World War II.

Visitors to the Cornerstone shared their personal thoughts and feelings with Asahi Shimbun reporters during the month leading up to Okinawa Memorial Day. The holiday marks the anniversary of the end of the fierce three-month battle put up by the Imperial Japanese Army against Allied forces in this prefecture.

On the early afternoon of May 29, Yasushi Kayamoto, 72, a resident of Nishihara, was seen visiting the monument with his wife Yoshiko, 70, despite an incessant, pouring rain.

He had been impatient to visit the Cornerstone, to which the name of his older sister, Kayoko, two years his senior, was soon going to be added.

He never knew Kayoko when she was alive. She died only 15 days after birth while his parents were returning to Okinawa from Taiwan, where they lived before the war ended. Taiwan was under Japan’s colonial rule from 1895 through 1945.

Kayamoto’s parents told him little about the wartime and about his sister before they passed away after the age of 90.

Kayamoto used to feel uneasy because his sister was not commemorated on the Cornerstone of Peace. Last year, however, he had an opportunity to learn about his sister’s name and the month of her death, December 1946, when he looked inside his family grave that contains the remains of his ancestors.

That allowed him to apply in 2020 for Kayoko’s name to be engraved additionally.

“A load is finally going to be taken off my chest,” Kayamoto said. “When the name is on the monument, I will tell that to my (late) parents.”

On the morning of June 17, work started to install a new memorial plaque at the Cornerstone.

The plaque shows the names of 41 newly identified war dead from both Okinawa Prefecture and elsewhere, including Kayoko Kayamoto.

“Some of the dead people may be feeling that they have been kept waiting for so long,” said Mitsuru Matsukawa, 68, the secretary-general of the Okinawa prefectural Peace Memorial Foundation, which administers the Cornerstone. “I want to thank them for waiting.”

Around noon on May 30, Jamie Larson, 44, a resident of Ginoza, stood by the side of a corner of the monument that is lined with Roman letters. The former U.S. Marine said he used to work at Camp Hansen, a military base elsewhere on Okinawa’s main island, until two years ago.

He was there with his two sons and a daughter so the children--all elementary school pupils--would learn about the history of the Battle of Okinawa on the eve of the U.S. Memorial Day, which fell on May 31 this year. On the Cornerstone are the names of more than 14,000 U.S. war dead.

Larson said he hopes his children will realize the preciousness of life, not just for U.S. citizens but for all humans.

Morifumi Miyagi, 50, a physical therapist from Nishihara, was seen visiting the Cornerstone with his wife Sayoko, 39, on the evening of June 13.

He said that until his father died five years ago, all his family members would visit the Cornerstone, on which are engraved the names of five relatives including his grandfather, on Okinawa Memorial Day every year.

After joining hands in prayer, the family would spread sheets on a lawn in the shade of trees in the park, where they would listen to his father’s accounts of ancestors over box lunches.

Each member of his family at the gathering would share accounts of how he or she was doing lately, while a memorial ceremony went on some distance away. There would even be occasional bursts of laughter.

“The place means so much to me,” Miyagi said. “I hope we will resume the practice next year if the COVID-19 pandemic is over.”

BROTHER PRAYS FOR SISTER WHO KILLED HERSELF

A coronavirus state of emergency, declared in 10 prefectures by the central government, was lifted June 20 in nine of them except Okinawa Prefecture, where it was renewed.

On the afternoon of June 21, the first day of the extended emergency, Takejiro Nakamura, 91, was seen tracing the name of his older sister, engraved on the Cornerstone, over and over again with his fingers.

“I haven’t been able to come here very often, Sister,” he was heard saying.

Nakamura lives on Gerumajima island, part of the Kerama islands in the prefecture. Realizing that his physical strength is failing, he made up his mind and came here for the first time in 10 years with the help of his second daughter, who is 54.

In late March 76 years ago, U.S. troops landed on Gerumajima island, where Nakamura, then a 14-year-old boy, lived in a family of three with his mother and 19-year-old sister. The trio hid in a shelter, where they attempted to take their own lives by tying a long rope around their necks. His sister, who was in the middle, was the only one to die.

Nakamura and his family had been made to believe they would be brutally killed if they were to be captured by the U.S. military. But he now regrets that he didn’t stop his family from the suicide attempt.

Kiyoko, the sister whom he remembers as affectionate, was a good singer of folk songs and a skillful dancer.

“Watch over me,” Nakamura said as he joined his hands and prayed before her engraved name.

BEATING THE CROWDS FOR EARLY PRAYER

On June 23, visitors were seen at the Cornerstone of Peace, with umbrellas and bouquets in their hands, as early as 6:30 a.m.

Chizuko Aragaki, 70, from Yonabaru, was there with Rinta Oshiro, her 14-year-old grandson, who is in the second year of junior high school. On the Cornerstone is the name of Kame Aragaki, her husband’s grandmother.

Kame was likely killed in shelling by U.S. troops while she was heading for the north of Okinawa’s main island as Japanese troops were withdrawing to the island’s south.

Chizuko comes here every year with her grandson to join hands and pray together. The pandemic made her uneasy this year, so she decided to come here early in the morning, when the site was not crowded.

“I never experienced the Battle of Okinawa in person, but I still have to pass down accounts of it,” Chizuko said.

“Whenever I am here, I realize that so many people lost their lives and that being alive now is such a blessing,” Rinta said.