Survey: Majority of Tokyo voters against Games, letting in fans 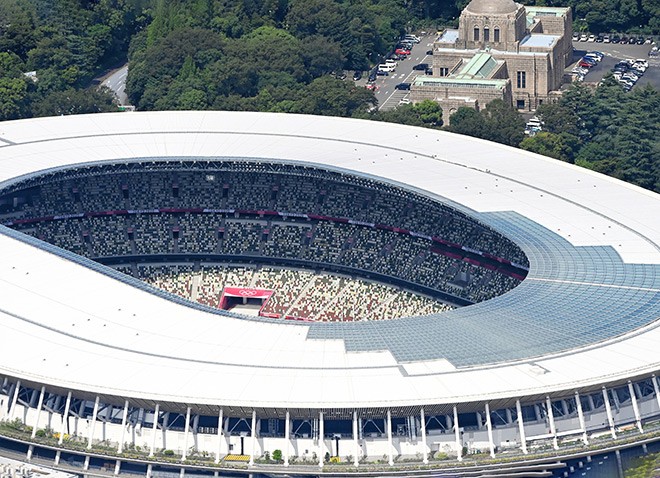 The National Stadium, the main venue of the Tokyo Olympic and Paralympic Games (The Asahi Shimbun)

Sixty percent of voters in Tokyo want the Olympics and Paralympics called off this summer, but if they must be held, 64 percent said all spectators should be banned from attending, an Asahi Shimbun survey showed.

Thirty percent of respondents were in favor of letting in spectators under limits on crowd sizes if the Games go ahead as scheduled in July, the survey showed.

Olympic organizers decided that domestic spectators can attend the events but only up to half of the venue or a maximum of 10,000 people.

The latest survey was held on June 26-27, after that decision, by contacting eligible voters in the capital by telephone.

In a nationwide Asahi survey conducted on June 19-20, before the decision on spectators was announced, 53 percent said no fans should be allowed while 42 percent favored crowd limits if the events must go ahead during the COVID-19 pandemic.

According to the latest survey, 38 percent of Tokyoites approved of staging the Olympic Games this summer, while 33 percent thought they should be canceled and 27 called for another postponement.

Women outnumbered men by a large margin in endorsing the “no fans” option if the Olympic Games must be held, at 71 percent, compared with 57 percent for men.

Asked to choose a party they would vote for in the Tokyo metropolitan assembly election on July 4, 24 percent of respondents picked the LDP, followed by 15 percent for Tomin First no Kai (Tokyoites First), a regional party that has Tokyo Governor Yuriko Koike as a special adviser.

The CDP was chosen by 9 percent, the Japanese Communist Party was supported by 7 percent, and Komeito was picked by 5 percent.

Twenty-six percent of respondents either declined to pick a party or said they were undecided.

In a similar poll conducted before the Tokyo metropolitan assembly race four years ago, the LDP and Tomin First no Kai were tied at 25 percent.

According to the latest survey, a candidate’s stance on the Olympic Games will not weigh heavily in the minds of 53 percent of voters, compared with 39 percent who replied otherwise.

Koike’s approval rating was 57 percent, up from 50 percent in the previous survey of Tokyoites in March 2020.

The governor has been hospitalized since June 22, citing excessive fatigue. Her busy schedule had included dealing with the COVID-19 situation in the capital, preparing for the Olympics, and addressing the media.

Fifty-five percent of respondents approved of her handling of the public health crisis, while 35 percent voiced disapproval, according to the survey.

But respondents were divided at 42 percent each on her approach toward the Olympic and Paralympic Games.

Overall, 65 percent of women viewed Koike in a favorable light, compared with 50 percent of men, according to the survey.

The survey was conducted by calling numbers of land line phones in Tokyo that were picked at random by computer. Valid responses were given by 804 voters, or 57 percent of 1,417 households that were found with eligible voters.