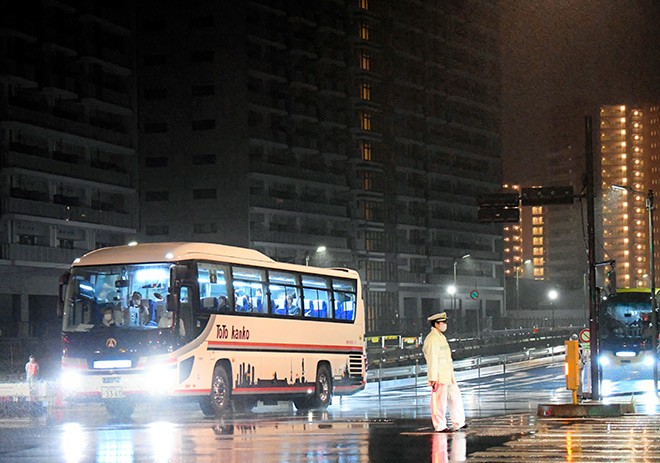 A shuttle bus departs the Athletes’ Village in Tokyo’s Chuo Ward during a pre-Olympic rehearsal on June 20. (Pool)

Several hundred thousand people who are expected to play direct roles in the Tokyo Olympics next month have been left out of the loop in the accelerated vaccination process for athletes, organizers and volunteers.

Plans to inoculate shuttle bus drivers, security guards and other mainly subcontracted workers before the Games are nowhere in sight.

Organizers of the Tokyo Olympics and Paralympics have been informed of the problem, but they have offered no solutions and only reiterated that the Summer Games will “be safe and secure” from the COVID-19 crisis, sources said.

In Gifu Prefecture, 27 bus companies are expected to dispatch up to 79 buses and 280 drivers for the Olympic and Paralympic Games.

“Almost all of the bus drivers have yet to receive a COVID-19 vaccination voucher,” Yoshiaki Kishino, chairman of the Gifu Prefecture Tourism Federation, said on June 18 at a prefectural government meeting on dealing with the novel coronavirus pandemic.

Citing the fact that the vaccine must be administered twice to be effective, Kishino said, “It will not happen in time for the Olympics.”

He said he is seeking help from the prefectural officials: “We are trapped in a difficult situation.”

Kishino also said the problem “should have been dealt with by” the Tokyo Organizing Committee of the Olympic and Paralympic Games.

But the committee had not given him any answer, except “it’s under review,” he said.

Sho Hiraki, vice governor of the central Japan prefecture, made an impromptu decision to administer the first shot to about 130 bus drivers at the Gifu prefectural government’s mass vaccination center by July 4.

Bus drivers in Mie Prefecture in the Kinki region have faced a similar challenge.

Fourteen bus companies in the prefecture will dispatch vehicles and drivers to help out in the operation of Tokyo Olympics.

But many drivers are still waiting to receive a vaccine shot, according to the Mie Bus Association.

“Some drivers might say, ‘I don’t mind transporting vaccinated athletes, but I won’t go if it’s a pick-up and drop-off service for members of the media who may not have been vaccinated,’” a representative of the association said.

The Olympic organizing committee has not made vaccinations mandatory for people involved in the sporting events.

However, the committee has started a project to inoculate staff members and volunteers whose tasks require them to be frequently in close proximity to athletes.

Subcontracted worker, such as bus drivers, are left to get the vaccine on their own. In many cases, such subcontractors have relied on their local government’s mass vaccination program.

A representative of a bus company in Nagoya said options are limited for local bus companies.

Only a few major bus companies in the capital of Aichi Prefecture can inoculate their employees through company-wide vaccination programs, the representative said.

The representative’s company is expected to dispatch drivers to the Olympics, but it has no clear idea on when they can get vaccinated.

“We are hoping our drivers are allowed to get the vaccine through the workplace vaccination programs of other companies,” the representative said.

Time is also running out for many security companies to have their workers inoculated in time for the Olympics.

A man in his 30s who lives in Tokyo and is expected to work as a security guard at the Olympics said he received his first dose at a mass vaccination center.

But he said many of his colleagues have been unable to even make an appointment.

“Being a security guard, I will inevitably come near many and unspecified persons, such as athletes, officials and spectators,” he said. “It is scary to have many unvaccinated security people working at (the Olympics).”

About 600,000 security guards are expected to work before, during and after the Olympic and Paralympic Games.

The All Japan Security Service Association has asked the central government to give security guards priority in receiving the vaccine. But that has not happened.

Despite the concerns of those directly involved, the Olympic organizing committee has taken the stance that there is nothing to worry about.

“We have built a testing system to make the event safe without a vaccine,” a top official of the organizing committee said. “We will carefully explain to all staff members that there is no problem if they practice infection control as per usual.”