TOWARDS EQUALITY: Breastfeeding at work requires a firm commitment to equality 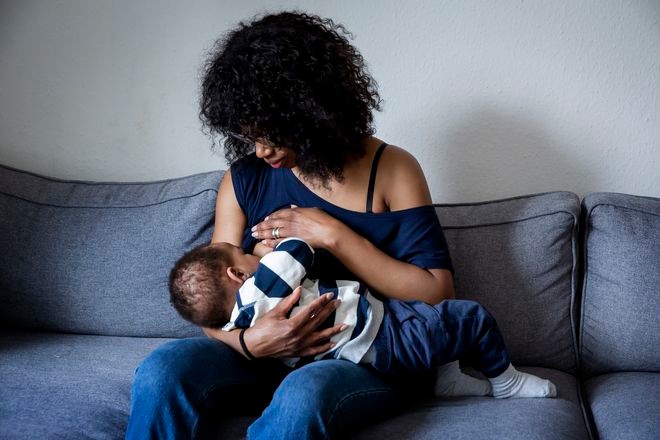 Rebecca Suimuna, a social worker, is breastfeeding her youngest-born, who is 15 months old. She breastfed her eldest child until she was 2 and a half years old, who then stopped of her own accord just after the birth of her younger brother. “Now I no longer express my milk, because my son is also bottle-feeding. He breastfeeds for five minutes when he comes back from the nursery for comfort, but it’s no longer about feeding himself.” While she was given support for breastfeeding at work, it’s her mother who has been a huge help. “From Cameroon, she watched over whatsapp videos how I was positioning my babies to the breast, and she gave me advice. She called me every other day! The culture of breastfeeding is very strong over there.” (Magali Girardin)

Better health in the short and long term, stronger mother-infant bonding and a higher IQ.

The advantages of breastfeeding have led the WHO, since 2001, to recommend this practice for “two years or beyond,” of which six months should be exclusive breastfeeding.

In Switzerland, maternity leave is 14 weeks (16 in Geneva), which does not easily allow women to follow these recommendations. But that could change. Since 2014, new employment legislation to protect breastfeeding at work has come into force nationwide.

During the infant’s first year, an employee must be offered 90 paid minutes--for a day of more than seven hours--in order to express milk or breastfeed, at home or in the workplace, in a room adapted for this purpose.

In addition to the advantages for the child, facilitated breastfeeding at work benefits women who might have hesitated about resuming their career, given that one woman in seven leaves her job post-maternity in Switzerland, according to the Swiss Federal Statistical Office.

What effect is this legislation having on breastfeeding?

“It’s too early to say, since the next set of statistics, collected every 10 years, won’t be published until 2024,” said Britta Boutry, coordinator at the WBTi (World Breastfeeding Trends Initiative) and consultant for the GIFA (Geneva Infant Feeding Association).

In Switzerland, 95 percent of mothers breastfeed their baby just after birth, and 40 percent of infants are still breastfed at the age of 6 months, of whom 26 percent are breastfed exclusively.

Some employers are setting the example, by aligning their approach with the WHO guidelines. Celine, an international official at the U.N. and mother of a 6-month-old baby, explained that her (female) boss had made her aware of her breastfeeding rights as soon as she found out about her pregnancy.

“I get two paid hours per day to breastfeed or express milk, not just for a year but until the child is 2 years old.”

The city of Geneva also boasts that it goes “further than the law” by “not imposing a limit on daily paid time dedicated to breastfeeding.”

A motion by the Swiss Party of Labor former MP, Annick Ecuyer, put forward in 2020 and demanding the creation of a breastfeeding room for members of parliament, is still pending.

Her former party colleague, Maria Perez, was known for having breastfed her daughter for nearly six years. She expressed her milk “in the toilets” since there was no allocated room.

CHALLENGES IN THE HOSPITAL SECTOR

In many professions, however, the right to breastfeed is not so straightforward and depends on the management’s level of sensitivity. The hospital sector is one example.

Getsy Mathavan, a junior doctor at Geneva University Hospitals (HUG), remembered her experience: “I went back to work at 100 percent capacity when my youngest son was 5 and a half months, in 2020. I was still breastfeeding him exclusively, and needed to express my milk several times a day without fail. During my first week, I was reporting to a (female) clinic director who was very committed, who thought to take away my pager when I was on my break so I wouldn’t have to stop and deal with an emergency. It was very different with the bosses who came after her, who weren’t attentive in that way.”

For Britta Boutry, Switzerland must improve the training of health care workers who have contact with mothers and babies. She regrets that the HUG and La Tour Hospital haven’t renewed their “Friends of Babies” (HAB) certification, which attests that the establishment is investing in the regular training of teams to promote breastfeeding.

“It’s important that the medical profession doesn’t underestimate the benefits of breastfeeding, and not just in the first four months,” the consultant said. “Some tend to advise putting a stop to breastfeeding when it presents the slightest difficulty. Yet when a baby is not putting on enough weight, for example, some key points need to be verified. Is the baby breastfeeding freely? Is his or her position comfortable? Has he or she been given a dummy? If the mother wishes to continue breastfeeding, we have every interest in getting trained professionals involved.”

While awaiting an application of the law for all types of breastfeeding workers, support groups led by volunteer mothers are playing an increasing role. The international organization La Leche League has active groups in Romandy (western Switzerland) and Geneva. Their meetings are open to all mothers who are looking for advice, support or reliable information about breastfeeding.

Because “the issue at stake is not just about health but it’s also societal,” according to Melina, who is breastfeeding her 20-month-old despite being employed at the University of Geneva: “Letting mothers who wish to, mother in this way, rather than forcing them to wean their child to satisfy the world of work: that’s the type of feminism I relate to.”

A vision that’s shared by numerous members of the La Leche League, and which is at odds with that of Simone de Beauvoir, who saw in breastfeeding a form of slavery.

This article is published as part of “Towards Equality,” a collaborative journalism program that unites 15 news media from around the world to shine light on the challenges and solutions through which gender equality can be achieved.