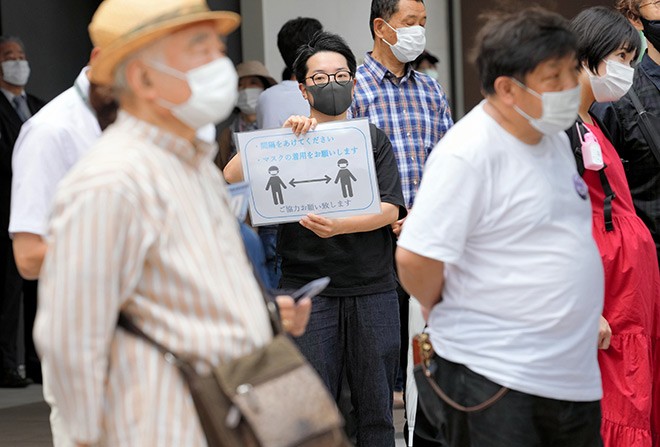 Voters listen to a campaign speech for the Tokyo metropolitan assembly election on June 27 as a man holds up a sign urging onlookers to wear a mask. (Reina Kitamura)

On the only Sunday of campaigning before the Tokyo metropolitan assembly election, heavyweights of all political parties hit the streets of the capital in full force on June 27 to woo voters.

They centered their messages on the government's response to the novel coronavirus pandemic and either harshly criticized or ignored the staging of the upcoming Tokyo Olympics and Paralympics as COVID-19 cases surge again.

Conspicuously absent from the campaigning was Tokyo Governor Yuriko Koike, who has been hospitalized since June 22 citing excessive fatigue.

The July 4 election will be closely watched as the outcome is said to signal the direction the political winds are blowing as the pivotal Lower House election must be held by October.

Chiharu Araki, who heads the Tomin First no Kai (Tokyoites First), the largest force in the 127-member assembly with 45 seats, blasted the central government, led by the Liberal Democratic Party, over its measures to combat the virus.

“Residents in Tokyo have been forced to suffer due to the central government’s failure to act fast in implementing preventive measures against the coronavirus at airports,” said Araki, who is seeking her second term representing Nakano Ward.

Tomin First no Kai is a regional party with Koike serving as special adviser.

Koike has had to miss out on the party's campaign so far after the health setback, apparently caused by the coronavirus crisis and the Summer Games, the daunting challenges that have dogged her over the past months.

Many analysts view the Tomin First no Kai's political fortunes as waning with Koike unable to be at the forefront of the campaigning as she was in 2017.

Four years ago, Koike was the driving force behind the newly formed party’s leap in the polls, which left the LDP in disarray with only 23 seats, the worst in the party’s history of the metropolitan assembly elections.

As for the Olympic and Paralympic Games, Tomin First no Kai supports holding the competitions without spectators.

Katsunobu Kato, chief Cabinet secretary, gave a speech for LDP candidates in Musashino, a city to the west of central Tokyo, on June 27, without touching on the controversial subject of hosting the Games this summer.

Instead, he touted the central government’s record of inoculating seniors with coronavirus vaccines.

“Many initially criticized us for promising the ‘impossible,’” he said, referring to the vaccination program’s planned completion of all seniors by late July. “But we are very likely to accomplish it by that deadline in all municipalities in Japan.”

Natsuo Yamaguchi, head of junior coalition partner, Komeito, also stayed mum on the Summer Games in his speech given in Sumida Ward.

He tried to take credit for his party in its handling of the coronavirus crisis, saying Komeito lobbied the central government to accelerate the vaccine rollout.

“Our party has pushed for the procurement of vaccines and administering shots early,” he said.

Though the LDP and Komeito did not specify their positions on the Games in the campaign promises for the assembly poll, the parties support staging them.

Whether the two parties can together capture 64 seats, a majority in the assembly, will be a key point of attention in the poll. Many agree that the LDP is certain to rebound from its crushing defeat in the last election, but it is unclear to what degree as some of the votes cast for Tomin First no Kai are expected to go to opposition parties.

Kazuo Shii, chairman of the Japanese Communist Party, criticized leaders of the LDP and Komeito at the national level for ignoring the Olympics in their campaign speeches for the assembly election.

“They are so irresponsible to remain silent about the subject,” he said in a speech he delivered in Meguro Ward. “They should call for the cancellation of the Games.”

The JCP is opposed to holding the Olympics and urging widespread PCR testing for free, acceleration of vaccinations and expansion of relief packages to people hit hard by the pandemic.

The main opposition Constitutional Democratic Party of Japan calls for either cancellation or postponement of the Olympics in its election pledge. It also is working with the JCP in some constituencies in the assembly race.

Yukio Edano, leader of the CDP, called for a change in Tokyo’s politics, saying restaurants and other businesses have suffered badly from the prolonged restrictions on their operations due to the pandemic.

“Politicians are supposed to help those who cannot control their own destinies,” he said in a speech in Akiruno, a western city in the Tokyo metropolis. “We need a change in the metropolitan politics to protect the lives of the people and businesses devastated.”