Search continues for toddler killed in Battle of Okinawa in 1945 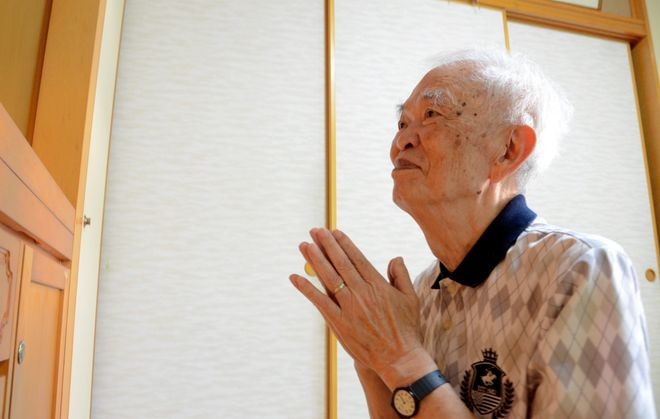 Sadayoshi Miyagi prays in front of the family altar dedicated to his younger brothers and other family members who were killed in the Battle of Okinawa, at his home in Naha on June 16. (Daizo Teramoto)

NAHA—Sadayoshi Miyagi has continued searching for a specific rock in the southern part of the main Okinawa island where he left the body of his brother 76 years ago.

His 2-year-old brother, Teiso, is one of thousands of casualties of the 1945 Battle of Okinawa whose remains have yet to be recovered or identified.

Once every couple of years, Miyagi, an 87-year-old resident of Naha, resumes his mission.

As he headed toward the area in spring this year, the horrific memories of the war returned, as they always have during his searches.

When he was 11 years old, Miyagi was living with his grandmother, parents, a younger sister and two younger brothers in Haebaru in the prefecture.

After the U.S. forces reached the main Okinawa island in April 1945, the family was forced to bounce back and forth between their home and shelters. Miyagi’s grandmother and father died during that time.

As the family moved south, U.S. forces intensified their attacks.

The second-eldest son died on May 20 after shrapnel struck his forehead. Miyagi’s mother was also killed by shrapnel around June 20.

The remaining three children, Miyagi, his 8-year-old sister, Toshiko, and Teiso, hid in a shelter in a hilly area.

Miyagi recalled that gunfire ceased and it was unbelievably quiet on June 23. When he looked outside, he saw a Japanese man walking toward the top of a hill with a white “surrender” cloth in his hand.

Miyagi stepped out from the shelter with Toshiko, who carried Teiso on her back.

The boy had died in the shelter.

A U.S. soldier who approached the children could only shake his head when he looked at Teiso’s lifeless body.

Miyagi placed Teiso’s body next to a large rock and promised to return for him some day.

Miyagi and Toshiko were sent to an orphanage before they were taken in by different families.

Several years later, Miyagi visited the area to find the rock and his brother’s body, but to no avail.

Although Miyagi worked in mainland Japan for at least 30 years, he walked around the southern part of Okinawa island with a map in his hand every time he returned home.

He talked to residents in the area and looked for familiar landscapes, hoping to come across the place where he had left Teiso.

He chose a place overgrown with weeds to put his hands together in prayer.

His sister has told him to give up the search, but Miyagi said he is determined to keep looking for the rock for as long as he can.

“It feels like my brother is still watching me from somewhere,” he said. “For me, continuing to search for that spot is a way to console his soul.”

The Battle of Okinawa lasted about three months toward the end of World War II and killed an estimated one in four local civilians.

Survivors began their postwar lives by collecting human remains under the occupation of the U.S. military.

According to a survey compiled by the prefectural government, the remains of about 130,000 war dead were found in the first 10 years after the war. The remains of up to 262 people have been recovered annually over the past 10 years.

But nearly 3,000 victims remain unaccounted for, and their remains are believed to be buried underground. Some areas inside U.S. military facilities have not been searched for the war dead.

The central government started DNA testing on remains in fiscal 2003. Since fiscal 2016, it is also conducting DNA tests on bones found without any identifiable items nearby.

In April this year, the bones of Sotokichi Kanaiwa, a soldier from Hokkaido who died in the battle at the age of 21, were delivered to his family members.

It was the first case in which remains were returned based on accounts provided by witnesses.

Kanaiwa’s bones were discovered in January 2019 in a cave in Itoman by a volunteer group led by Tetsuji Hamada, 58, who lives in Aomori Prefecture and has been searching for war dead remains in Okinawa Prefecture for 20 years.

According to Hamada, the top of the skull was found about 2 meters into the backfilled cave. Shrapnel fragments were embedded in the thighbone.

Hamada talked to former soldiers for any information that could identify the victim. He also took notes of their personal accounts.

“Surviving family members are still hoping for the return of their loved ones,” he said. “Remains are proof that our ancestors had lived. They can be excavated during development projects and other circumstances, and the least I can do is collect them, and, if possible, return them to their homes.”