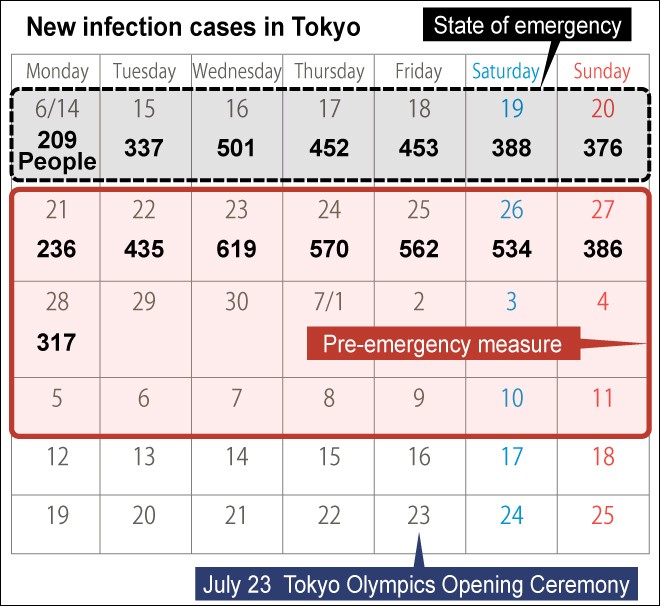 Virus trends in the capital indicate that the “fifth wave” of infections will strike when hundreds of thousands of people gather in Tokyo for the Olympics and could overwhelm medical facilities, health experts warned.

The daily count of new COVID-19 cases in Tokyo has continued to rise on a week-over-week basis, while the pace of increase appears to be accelerating.

“Looking at the movement of people and the impact of COVID-19 variants, there is no factor in place to reduce the number of new infection cases,” Haruo Ozaki, chief of the Tokyo Medical Association, said. “Considering past infection trends in Tokyo, it is inevitable that a big infection wave will hit during the Olympics.”

The Opening Ceremony for the sports extravaganza is scheduled for July 23.

Decreases in new infection numbers have been achieved when Tokyo was under a COVID-19 state of emergency.

Since the third state of emergency was lifted for the capital, the number of new COVID-19 cases has rebounded.

On June 20, the last day of the state of emergency, the number of new cases in Tokyo was 376, up 72 from the previous week.

Since then, the daily count has exceeded the previous week’s figure for nine consecutive days.
From June 22 to 26, the increases rose in size to between 98 and 146.

Tokyo's daily average of new infections in the week until June 20 was 101 percent of the figure for the preceding seven-day period. But it jumped to 124.8 percent for the week to June 28.

“The number of new cases increased by about 100 from the same day a week ago,” a metropolitan government official said on June 26. “Considering the fact that pedestrian traffic has significantly increased, I am worried that the upward trend will grow even more.”

Tokyo is now under pre-emergency measures to control the spread of the virus. Those steps, including restrictions on alcohol-serving businesses, will expire on July 11.

If the infection situation worsens in the capital, the central and Tokyo metropolitan governments may have to extend the pre-emergency measures.

Yasutoshi Nishimura, the central government’s point man on dealing with the health crisis, has also said another state of emergency could be declared if necessary.

If the pre-emergency measures are extended, criticism over the decision to allow spectators to attend the Olympics will further rise.

Organizers of the Tokyo Olympic and Paralympic Games announced that venues can be filled to half of capacity for a maximum of 10,000 people.

Health experts had repeatedly urged the organizers to hold the Olympics without spectators if there were a predictor for an infection spread or a collapse of the health care system.

However, there is no concrete standard to define such a predictor.

Even before the state of emergency was lifted for Tokyo, the movement of people, particularly in busy districts, started to rise.

According to a research results presented at a meeting of the metropolitan government on June 24, foot traffic has increased for five consecutive weeks.

In the three days after the state of emergency was lifted, the nighttime movement of people rose by 7.1 percent, while daytime foot traffic increased by 1.3 percent, the results showed.

(This article was written by Momoko Ikegami, Yuki Okado and Hiroshi Ishizuka.)