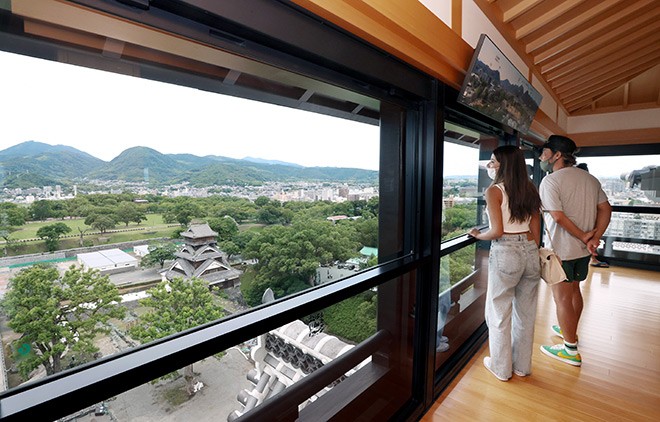 The interior of Kumamoto Castle's main tower in Kumamoto reopens to the public on June 28. (Minako Yoshimoto)

KUMAMOTO--The interior of Kumamoto Castle's main tower reopened to the public on June 28 following the completion of repairs from the 2016 earthquakes here that knocked off roof tiles and collapsed walls.

The twin quakes damaged many buildings inside the castle area.

The castle tower was initially supposed to reopen in April, but was delayed due to the COVID-19 pandemic.

A 35-year-old female resident who came to the castle for its reopening said she enjoyed the views from the tower.

“I've been visiting Kumamoto Castle since I was a child, and it's indispensable,” she said. “I was shocked when it was hit by the disaster. I'm glad that I was finally able to take in the view here.”

The Kumamoto city government aimed to fix the castle tower as a symbol of recovery as early as possible and completed the repairs at the end of March.

Anti-seismic reinforcement work was completed on the tower and an elevator was newly installed.

A new exhibition at the castle also details the damage the quakes inflicted.

For the time being, the number of visitors who can enter the tower at the same time is limited to 650 as part of anti-virus measures.

Kazufumi Onishi, Kumamoto city's mayor, announcing the reopening of the interior at a June 25 news conference, called it “a good chance for people to feel the restoration from the Kumamoto Earthquakes."

"It's a symbol of recovery and encourages people,” he said. “I hope that the opening can make people think positively even in the midst of a difficult situation.”