We are not alone: Mystery-loving Fukushima area opens UFO lab 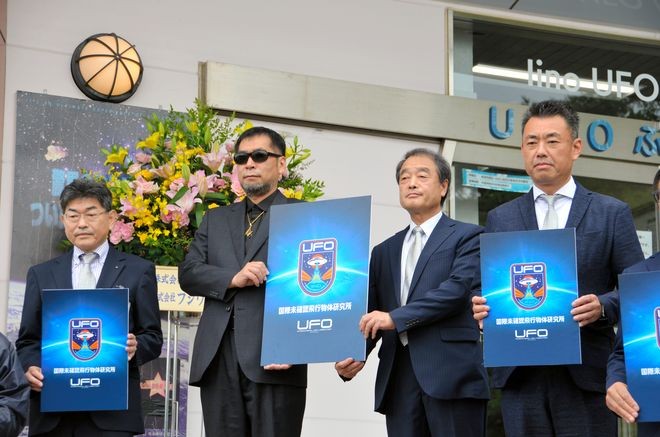 Takeharu Mikami, second from left, the editor-in-chief of occult magazine Mu, is named the first director of the International UFO Lab in Fukushima on June 24. (Shoko Rikimaru)

FUKUSHIMA--The Iinomachi district here has doubled down on its efforts to become the pre-eminent UFO hub in the universe.

The International UFO Lab was founded on June 24 in the district to collect, analyze and disclose information on sightings of unidentified flying objects around the world.

It opened on World UFO Day, which celebrates the first reported UFO sighting, by a U.S. businessman in 1947.

The center intends to spread information via its website and organize events.

“It will be a research institute that will attract worldwide attention,” said Takeharu Mikami, who was appointed director of the lab, at the opening ceremony. “We’d like people to provide us with a lot of information.”

Mikami is also editor-in-chief of Mu, a monthly magazine founded more than 40 years ago to study supernatural phenomena and occult mysteries.

UFO sightings have long been reported near Senganmori, a cone-shaped mountain in Iinomachi located about 30 minutes by car from the Fukushima city center.

For around 30 years, local residents have been promoting the district as home to UFOs. The UFO Fureaikan museum was established halfway up the mountain in 1992.

The museum has collected about 3,000 documents and other materials related to UFOs, and some are available for public viewing.

The new research facility was set up inside UFO Fureaikan.
Lab members include officials of a local chamber of commerce and industry as well as “special researchers” in charge of publicizing its findings in English.

The general public can also become members for one to three years when they pay membership fees ranging from 10,000 yen ($90) to 30,000 yen. Members are entitled to receive special T-shirts and locally brewed sake and eligible to attend UFO-related events.

Global interest in UFOs resurged after the U.S. Department of Defense recently submitted a report on UFOs to Congress.

“We hope people from across the world will visit Iinomachi for a mysterious experience after the coronavirus pandemic settles down,” said Hiroshi Saito, 66, director of the Iinomachi Chamber of Commerce and Industry.