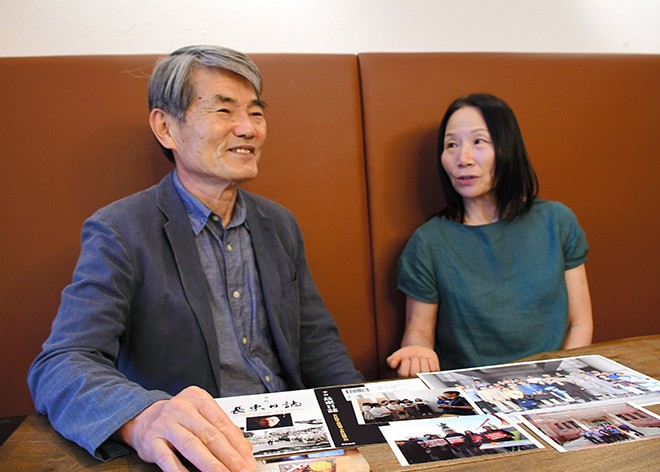 Lee Chul, left, and his wife, Min Hyang-sook, pose in Osaka on June 10 over photos from the time when he won a not guilty verdict in a retrial. (Hajimu Takeda)

OSAKA--Lee Chul broke the silence on the torture and incarceration he suffered in South Korea as an alleged North Korean spy, 33 years after he was freed from prison.

The ethnic Korean born in Japan, who was even sentenced to death under South Korean authoritarian rule, published a book of memoirs in June.

Lee, 72, said he decided to speak out because he is alarmed as democracy continues to face crises around the world, including in Myanmar, where a military coup has toppled a democratic government.

“We owe the democracy we have now to many who were sacrificed,” Lee said. “What I experienced illustrates what happens when that is lost.”

Lee is a symbolic figure representing a dark page of South Korea’s modern history--a series of human rights violations that occurred under dictatorships during the 1970s and 1980s.

Lee and other ethnic Koreans from Japan were tortured by South Korea’s intelligence agency and imprisoned under trumped-up charges of committing espionage for North Korea. Some were staying in the country as students while others were visiting there for business purposes.

On the eve of the Group of 20 summit held in Osaka in June 2019, Lee and his wife, Min Hyang-sook, 71, were invited to a social gathering attended by Moon Jae-in, president of South Korea.

“I offer my heartfelt apologies on behalf of the nation in the capacity of its president,” Moon told the gathering.

It was the first time for a South Korean president to apologize for human rights violations in reference to ethnic Koreans from Japan who were held as political prisoners.

In South Korea, the series of false accusations, made under the military dictatorships of Park Chung-hee and Chun Doo-hwan, are known as “espionage frame-ups on compatriots in Japan.”

It is believed they were aimed at stirring up fear of North Korea and inculcating the public with a need for an authoritarian administration.

According to figures from the Zainichi Kankoku Ryoshinshu Doyukai (Association of ethnic Korean prisoners of conscience in Japan), some 70 ethnic Koreans from Japan were framed in South Korea as being North Korean spies, with death sentences finalized for seven of them.

Of those former political prisoners, 36 have so far been found not guilty in retrials, a path of vindication that became available some 10 years ago.

Lee was released on parole in 1988 after spending 13 years in prison.

He privately wrote seven B5-size notebooks’ worth of memoirs while he was on trains commuting to and from his work in the hopes that his two children would have an opportunity to read them someday.

Born a second-generation Korean in the southern prefecture of Kumamoto, Lee graduated from Chuo University in Tokyo.

In December 1975, he was taken blindfolded from his boarding house when he was a graduate student at Korea University in Seoul. At the Korean Central Intelligence Agency headquarters, he was tortured for 39 days in an underground interrogation room and was forced to make false confessions.

Part of the harsh inquisitions there is detailed in Lee’s memoirs.

“A defenseless person, suddenly taken away one day, is an easily cookable prey for those torture experts,” a passage in the book reads.

He was forced to take off all his clothes and was beaten up all over with wooden clubs. Interrogators asked him the same questions over and over again to keep him awake all night. With his personality and will obliterated, he was led into believing he was the one to blame.

“I did not dare to write everything I could have written because it was so painful when the memories came flooding back,” Lee said of his memoirs.

In March 1977, the Supreme Court of Korea turned down Lee’s final appeal, finalizing the death sentence he had received on charges including violation of the National Security Law.

Min, who was his fiancee, was also taken forcibly and sentenced to three and a half years in prison.

Rescue campaigns organized by his former classmates in Kumamoto Prefecture and friends at his university in Japan helped him regain his will to live.

“I thought my friends were telling me, ‘Let’s go together and go forward with courage! Don’t be daunted, don’t be afraid!’” says another passage in Lee’s memoirs.

A key political figure in South Korea issued a pro-democracy statement in 1987, which included a pledge to introduce a direct election system for the nation’s president. Seoul hosted the Summer Olympics the following year.

Lee was released from prison the day after the Olympics Closing Ceremony. He married Min in Seoul 25 days later and many of his supporters attended the wedding.

“I wouldn’t be what I am today if it had not been for the support I got from Japan,” Lee said. “That kind of history is being forgotten amid the diplomatic friction of recent years between Japan and South Korea.”

Anxiety over that development was one of the motivations for publishing the book, he said.

The ethnic Korean political prisoners from Japan came to be viewed in a different light in South Korea after a truth investigatory commission, set up under President Roh Moo-hyun’s administration (2003-2008), helped uncover the reality.

A retrial won Lee a not guilty verdict, which was finalized in 2015. He was rehabilitated after 40 years.

His book of memoirs, “Jangdong Nisshi,” released by the Toho Shuppan publishing house, is priced at 3,850 yen ($35), including tax.