Shinto shrine set up in retired railcar in Ibaraki for revitalization 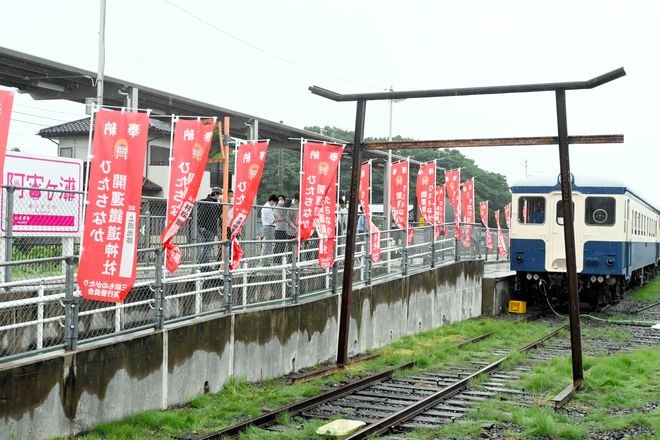 A Shinto ritual was performed to mark the founding of Hitachinaka Kaiun Tetsudojinja shrine in the city's Ajigauracho district on June 19, which uses the railcar as its "goshintai" object of worship and the rails for its torii gate.

"The shrine may protect worshippers from traffic accidents and bring good fortune for a long life," said Hisaaki Sato, 52, the head of a civic group set up to revitalize the area with the help of railway buffs, who was involved in the project.

The railcar is a KiHa 222 diesel unit built in 1962, according to Sato, and has been stored at Ajigaura Station after it was retired from service in 2015.

The railcar, which maintained an accident-free record during its many years of service, was used in a mine railway in Hokkaido as well as on the Minato Line.

Sato also plans to build a torii gate at Nakaminato Station on the Minato Line in the city's Shakamachi district. Following that, the shrine at Ajigaura Station would act as the main hall so that railway tracks connecting the two stations could serve as the approach to the shrine.

"Worshippers will be able to travel along the approach aboard a train on the Minato Line," Sato said. "It'll be interesting to see the areas along the line act as 'nakamise,'" he added, referring to traditional areas found on the grounds of temples and shrines where visitors can buy items to pray for good fortune.

The costs of the project were covered through a crowdfunding campaign last fall.

Chiaki Yoshida, the president of Hitachinaka Seaside Railway, lauded those who suggested the plan.

"The ideas we get from local residents are always a help to us," he said.