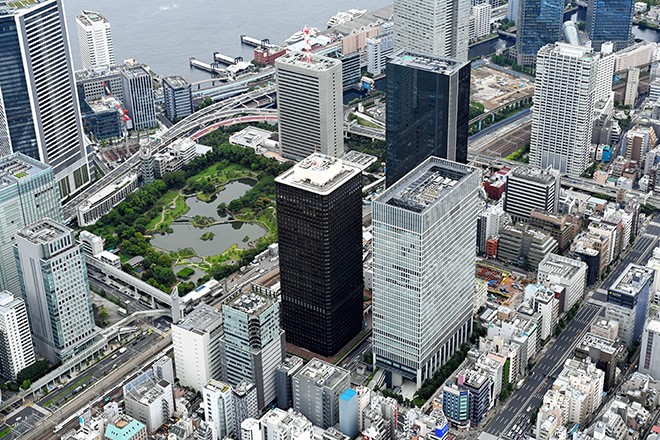 The World Trade Center Building, identifiable as the black structure with the white area on its roof, center, in Tokyo's Hamamatsucho district, closes for demolition on June 30. (Sayuri Ide)

Tokyo's World Trade Center Building, which at 152 meters high was Japan’s tallest building when it was completed in 1970, is shutting for good on June 30 for demolition.

While the skyscraper, long a landmark in the capital's  Hamamatsucho district, will be scrapped, a new and taller building is planned for the site with completion eyed for March 2027.

The new structure will be 83 meters taller than the current building to reach a height of 235 meters and have 46 floors above ground.

To prepare for the closing of the building, the Seaside Top observatory deck on the 40th floor was shuttered in late January.

But on June 29, third- to fifth-graders from nearby Onarimon Elementary School were given special permission to go up to the deck for a final glimpse of the neighborhood from on high.

The panoramic view allowed the children to take in Haneda Airport and Tokyo Tower.

“I can see our school!” one youngster exclaimed

“Where's the Skytree (tower)?” another asked.

“The ocean's really beautiful on a clear day and we can see lots of famous places," said fourth-grader Honoka Magatani, 10. "It's a very historic building.”

Nine-year-olds Mirei Omine and Ao Kanasugi, both said it was a shame that the building had to be demolished.

DIFFERENT VIEW FROM BELOW

But those who have lived under the shadow of the World Trade Center Building have different memories of the structure.

Hiroko Okazaki, 57, was born and raised in the nearby Shibashinmei shopping district. Her family operates a futon shop there.

To her, the building was part of the daily landscape. Tokyo Tower is located about one kilometer west of the World Trade Center Building.

“We couldn't get lost as long as we were able to see the World Trade Center Building and Tokyo Tower,” Okazaki said. “I felt peace of mind just by seeing one of the structures. That's what it meant to me.”

Her mother’s family home is in Kobe and whenever she returned to Tokyo on the Shinkansen and saw the World Trade Center Building through the bullet train's window, Okazaki felt she had come home.

Yoshihiko Uchida, 60, is the president of a Japanese sweets company in the same shopping district. While he also has nostalgic memories of the World Trade Center Building, he recalled that when it was built, the neighborhood still contained many small single-family homes.

But after the building went up, other redevelopment projects emerged in the area, leading to the replacement of the residential district by large commercial buildings.

That led to skyrocketing land values and Uchida recalls struggling with his parents to pay the correspondingly higher property taxes.

“In a sense, it was a truly scary building that drastically changed this neighborhood,” Uchida said. “But I will miss it when it's gone.”

Five years prior to its completion, the Tokyo Chamber of Commerce and Industry issued a statement asking the central government for cooperation in building a trade center building that would be closely located to the relevant government agencies and where companies looking to trade abroad could set up offices.

But technological changes have made the World Trade Center Building obsolete.

“Due to the advances in information technology, there's not as much need for everything to be located in the same building,” said Norio Akimoto, an official with the company that operates the building.

While the building in the past housed trading and petroleum companies and the Japanese branches of foreign companies, tenants have gradually been leaving.

But the site where it stands is too convenient to remain vacant for long. The building is the terminal station for the Tokyo Monorail to Haneda Airport and nearby Hamamatsucho Station is also only three stops from Tokyo Station.

Akimoto said that led to the plan to construct a new structure on the same site.

“We want to maintain the competitiveness of the building by constructing a structure that features the most advanced technology,” he said.