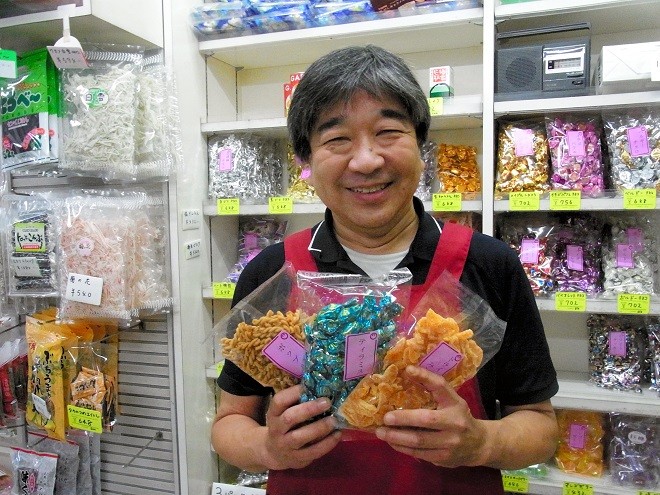 Koji Okada, a senior managing director of Okada Kameya in Tokyo’s Chuo Ward, shows off some of more than 300 food items available there. (Misako Takahashi)

Born amid the destruction of World War II, a small family-run business now operating in Tokyo’s Ginza district avoided a pandemic-induced collapse thanks largely to the only computer-savvy official at the company.

An online campaign has led to brisk sales and steady streams of customers at Okada Kameya, located on a corner of the brightly lit entertainment district.

After the novel coronavirus crisis spread and restrictions were requested on alcohol-serving businesses, many of Okada Kameya’s clients suspended operations.

The small business was in danger of collapsing around the start of this year.

Tomohiro Okada, 29, the lone tech whiz, suggested the shop go online for sales and promotion for the first time in its history.

All items available at the online shopping site were quickly sold out.

The company also received publicity through a plethora of interviews with media companies reporting on how the pandemic has affected Japan’s drinking culture, including the increase in drinking at home.

Long lines of customers, both men and women, now form around Okada Kameya every weekend. Nearby company workers and elderly customers visit Okada Kameya on weekdays.

Many customers said they were asked by their families to “buy and send some appetizing products featured in TV shows.”

A proprietress of a hostess bar who has temporarily closed her business spends time packing snacks at the back of Okada Kameya to “be of help for the busy shop.”

“The town is full of kindness,” Keiichi said. “It is unclear whether the situation will return to normal after the end of the coronavirus pandemic, but we will continue to promote the attractiveness of drinking in Ginza.”

With more than 300 sorts of otsumami usually available, Okada Kameya looks like a traditional “dagashiya” candy store designed for adults.

Tiramisu-like chocolate, dried mikan and spicy snacks not only line the shelves in the 30-square-meter outlet, but they are also displayed along the walkway outside to entice passers-by.

The food products come from across Japan.

Koji Okada, 58, a senior managing director of Okada Kameya, explained the appeal of the store’s otsumami.

“When a hostess bar provided a customer with peanuts from elsewhere, the patron said they are not Kameya’s,” Koji said, grinning. “Sales representatives from snack makers nationwide often come here without appointments, and boiled shellfish from Yamanashi Prefecture became a big hit here after we put it on sale.”

Okada Kameya started as a rice gruel restaurant in front of Shinbashi Station in Tokyo in the chaotic aftermath of World War II. It then sold rice crackers in the capital’s Ningyocho district before wholesaling and retailing food products in Ginza in 1961.

In the 1980s, toward the asset-inflated period of economic growth, Okada Kameya was busy “fielding all kinds of orders.”

“We frequently purchased and delivered sashimi and fish from the Tsukiji market,” Koji said. “We touted ourselves as delivering everything but alcohol around that time.”

Even after the end of that high-flying period, the family-run store continued underpinning Ginza in the Heisei Era (1989-2019).