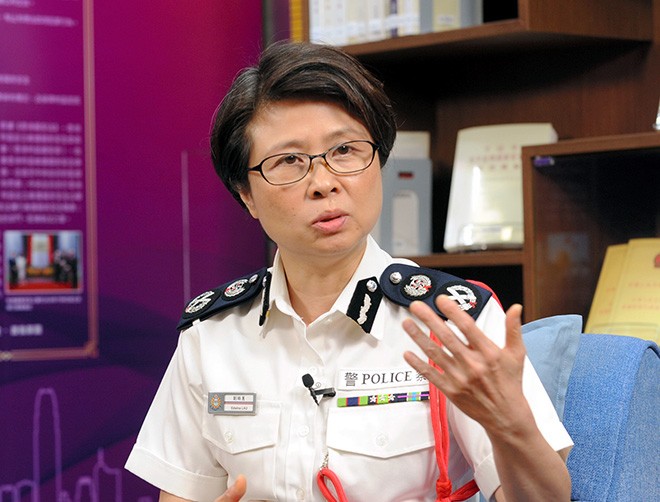 Edwina Lau, the Hong Kong deputy police commissioner in charge of national security, responds to a question during an interview with The Asahi Shimbun. (Atsushi Okudera)

HONG KONG--The local police official in charge of enforcing the heavily criticized National Security Law defended its provisions and said it has helped to reduce violence in Hong Kong.

Speaking on June 30 in an exclusive interview with The Asahi Shimbun, Edwina Lau, the deputy police commissioner in charge of national security, said, “Violence has clearly decreased and those who proclaimed their intent to decide Hong Kong’s future by themselves have left various political organizations and fled.”

Since the Hong Kong National Security Law went into effect a year ago, pro-democracy Hong Kong assembly members, activists, and more recently, executives of the Apple Daily newspaper have been detained under its provisions.

Lau said her national security organization has over the past year arrested a total of 117 individuals, with about half that number as well as three companies, including Apple Daily, already indicted.

The tabloid was forced to stop publishing on June 24 after the provisions of the National Security Law were enforced to freeze the funds of the company.

Regarding the international criticism directed at the law as a means of clamping down on a free press, Lau said that the provisions of the law had no effect on the daily reporting activities of the media.

“Freedom is not absolute,” she said. “No individual should use a media organization as a hiding place to commit crimes. The security of the nation is of the highest priority.”

The National Security Law followed the 2019 revision of a law that made it easier to extradite criminals from Hong Kong to China. The move was met by often violent protests, which Lau described as a “black violence.”

She added that the National Security Law had the strong authority to leave those the police considered capable of damaging safety “quivering with fear.”

Beijing worked for passage of the National Security Law and after it came into effect, an organ answering directly to Beijing was installed in Hong Kong to guide and oversee the Hong Kong police.

Lau said periodic meetings have been held with officials of the Chinese organ to carry out the responsibilities laid out in the National Security Law. She made clear that the Hong Kong police were acting under the instructions of that Beijing organ.

She also revealed that a section to which local residents could report suspected violations of the National Security Law had been set up in November and so far in excess of 100,000 reports had been received.

Pro-democracy activists have slammed that section as encouraging informants.

When asked if the National Security Law was leading to concerns among foreigners contemplating visiting Hong Kong, Lau said, “Compared to two years ago when subway stations were damaged by protesters, law and order has improved in Hong Kong. Those coming to Hong Kong on business are not of our concern because they have no intention of overthrowing the state or working for the independence of Hong Kong.”