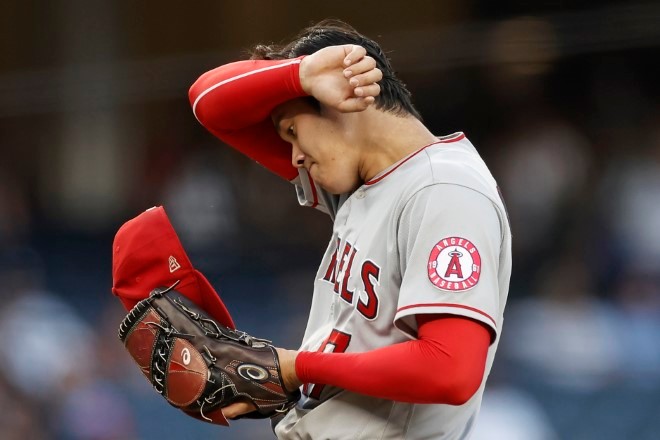 Los Angeles Angels pitcher Shohei Ohtani wipes his brow during the first inning of its baseball game against the New York Yankees on June 30, in New York. (AP Photo)

Babe Ruth, he was not. At least on this night.

The two-way phenom got only two outs Wednesday for the Los Angeles Angels during his highly anticipated first pitching appearance in the Bronx. Ohtani, who leads the majors with 28 home runs, was chased after four early walks and charged with a career-worst seven runs in a game delayed twice by rain.

Making his career-high 12th pitching start of the season on a 92-degree night, Ohtani flopped long before the showers arrived.

He was handed a 2-0 lead on Phil Gosselin’s two-run homer in the top of the first but quickly gave it back. The 26-year-old right-hander walked his first three batters and crossed up catcher Kurt Suzuki, resulting in a passed ball that advanced two runners.

A visit from pitching coach Matt Wise didn’t do the trick, either.

Giancarlo Stanton and Gleyber Torres hit consecutive RBI singles to tie it before Ohtani struck out Rougned Odor on a splitter, finally getting his first out on his 30th pitch.

Miguel Andújar drove in a run with a slow groundout, and Ohtani had a chance to get out of the inning when he got ahead 0-2 on Clint Frazier. But then Frazier was hit in the hand by an off-speed pitch, and Ohtani walked No. 9 batter Brett Gardner on four pitches to force in a run that made it 4-2.

Angels manager Joe Maddon strolled out to the mound and removed Ohtani, who slumped at the shoulders. He got pats on the back and chest from teammates, had a quick, upbeat chat with Maddon and then thanked plate umpire John Libka as he walked off.

Ohtani threw just 20 of 41 pitches for strikes--though it wasn’t the shortest start of his major league career. He gave up five runs without getting an out on 30 pitches last July 26 at Oakland during his first pitching appearance in almost 23 months following Tommy John surgery.

Aaron Slegers, just recalled from the minors, replaced Ohtani and gave up a three-run double to DJ LeMahieu, who punched a grounder inside first base on a half-hearted swing. That made it 7-2 and closed the book on Ohtani, whose ERA jumped from 2.58 to 3.60.

Ohtani also batted leadoff Wednesday and flied out against Domingo Germán to begin the game. The slugging designated hitter/pitcher had 11 homers in his previous 13 games.

He became the first pitcher to start one game after hitting two home runs for his team since Ruth did it for the Yankees on Sept. 28, 1930. Ohtani socked three homers in the first two games of the four-game series.

“I haven’t talked to him specifically about this, but I know he enjoys this,” Maddon said before Wednesday night’s game. “And yes, I think playing here has a little extra thing going on for him right now. It’s hard to deny that.”

Los Angeles scored a run in the second and then Maddon sent up a pinch-hitter for Slegers in the leadoff spot.

By the third inning, the taxed Angels were on their fourth pitcher. Dylan Bundy, who vomited on the Yankee Stadium field in the heat Monday night and lasted only 1 2/3 innings, was summoned for his first relief appearance since 2016 with Baltimore.

With one out in the bottom of the third, the game was halted for 42 minutes because of rain. Play was stopped again due to a storm in the middle of the fifth with New York leading 7-4.