CGI wizardry brings the Battle of Sekigahara back to life 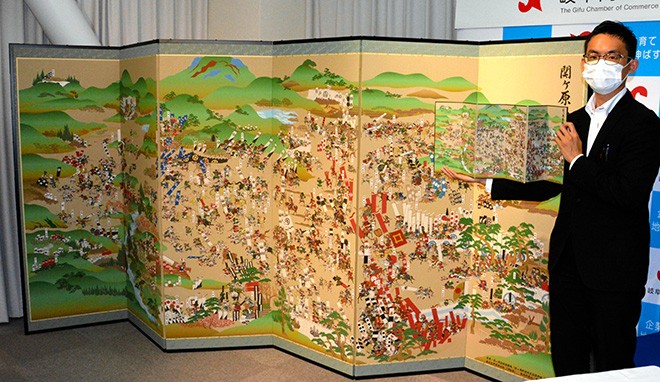 A Kaitakudo Art Co. representative holds a small version of the Battle of Sekigahara “byobu” folding screen in front of a large version in Gifu. (Yoshinobu Itakura)

GIFU--Depictions of the Battle of Sekigahara, the decisive conflict of the feudal era that ushered in the Tokugawa Shogunate, are perhaps best known from artwork on a “byobu” folding screen housed at the Sekigahara Town History and Folklore Museum.

Now, that battle in 1600 so steeped in bloodshed comes roaring back to life, courtesy of CGI computer technology based on the original “Sekigahara Kassen-zu Byobu” painted in the Edo Period (1603-1867).

The high-tech byobu were produced by Kaitakudo Art Co., a manufacturer and wholesaler of hanging scrolls founded in 1970 in Kitagata, Gifu Prefecture.

After obtaining permission from the Sekigahara town office, the company asked a Tokyo-based designer to create the byobu.

It took more than six months for the designer to draw each of the 113 warlords and the natural landscape, using computer graphics.

The byobu also come with commentary for all the warlords.

“We hope people will enjoy the ‘Kassen-zu,’ which is a wonderful piece of historical legacy, as an approachable interior accessory,” a Kaitakudo representative said.

The byobu are available in large, medium and small sizes.

They will be released for sale around late July.

For inquiries, visit the company’s official website at (https://kaitakudo.co.jp/englishtop).