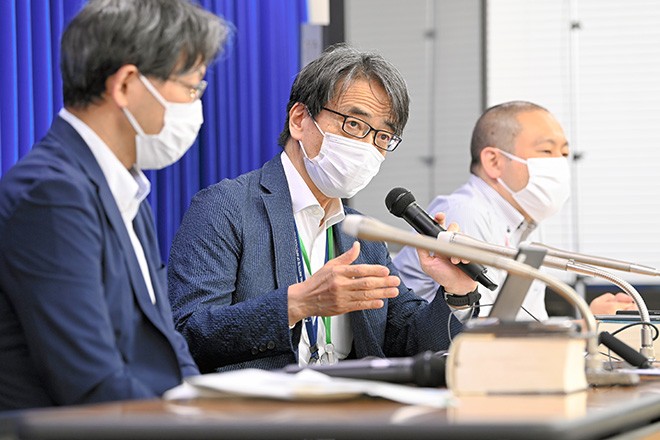 Takaji Wakita, center, the head of the National Institute of Infectious Diseases who chairs the health ministry’s advisory panel, talks about the spread of the novel coronavirus in Tokyo at a news conference on June 30. (Sayuri Ide)

The resurgent number of new COVID-19 cases in Tokyo has raised concerns among government officials that the Olympic Games could be held without spectators after all.

Health experts on June 30 warned the government against lifting COVID-19 pre-emergency measures for Tokyo as scheduled on July 12, saying newly confirmed infections in the capital have neared the most serious stage 4 level concerning the spread of the virus.

They said now is the time for a quick response to the new outbreaks, not an easing of the anti-virus measures.

Data from an expert panel advising the health ministry showed the number of new cases per 100,000 people came to 24.59 in Tokyo in the most recent week, up 25 percent from the preceding week. If the number is 25 or higher, it indicates a stage 4 situation.

“It would not make sense to lift the pre-emergency measures as scheduled,” said Kazuhiro Tateda, professor of infectious diseases at Toho University and a member of the panel.

Tokyo reported 673 new COVID-19 cases on July 1, 103 more than a week ago. It was the 12th straight day for the daily count to increase from the previous week.

One factor behind the rising numbers is the spread of the Delta variant, which was first identified in India and is far more contagious than the strain that swept across Japan last year.

The National Institute of Infectious Diseases estimates that the Delta variant will cause more than half of all new COVID-19 cases in Japan by the middle of July, up from roughly 30 percent at the end of June.

The daily number of new cases in Tokyo will top 1,000 by the end of July, according to an estimate by Kyoto University and the NIID.

But that figure was based on the “most optimistic scenario” of a small impact from the Delta variant and no increase in people’s movement during the Summer Games.

The Opening Ceremony for the Olympics is scheduled for July 23.

The health experts said strong measures to swiftly deal with the current situation, such as declaring another state of emergency, coupled with the acceleration of the vaccination program could help Tokyo keep open more than half of its hospital beds for seriously ill COVID-19 patents.

But if such decisions are delayed, hospitals will be flooded with patients, they added.

Senior officials of the Suga administration are growing worried about the resurgence in Tokyo because it could jeopardize plans to allow spectators to attend the Olympic Games.

The central and Tokyo metropolitan governments, as well as the Tokyo Olympic organizing committee and other organizations, agreed on June 21 to let fans fill half of the competition venues up to a maximum of 10,000 people.

The agreement was based on the assumption that pre-emergency measures in Tokyo would be lifted on July 12.

But they also decided that holding the Summer Games without spectators would be an option if a fourth state of emergency is declared for the capital or if the pre-emergency period is extended beyond the original deadline.

Suga has said he wants the Olympic events to be held with spectators.

The prime minister is seeking to avoid declaring a state of emergency because it would effectively rule out allowing spectators in the stands.

Such an emergency declaration would also call into question the legitimacy of Suga’s statement that holding the Tokyo Olympics would be “proof that humanity has defeated the novel coronavirus.”

If the pre-emergency measures are extended in the capital, the government is expected to make a “political” decision over the spectator number.

However, calls have grown for a no-spectator decision if the Games are held under pre-emergency measures.

A senior Diet member of Suga’s Liberal Democratic Party said the words “state of emergency” have a negative ring, and they would hurt Japan’s image at home and abroad if such a declaration is in place during the Olympics.

An aide to the prime minister, echoing other officials’ views, pointed to a possible solution for the growing health problem: “Vaccines can be game changers.”

The vaccine program to inoculate people 65 or older, an age group most susceptible to serious symptoms if infected, has made progress.

In Tokyo, patients in their 60s or older represented about 20 percent of new infection cases as of January. But their share dropped to below 10 percent in the most recent week.

Some senior members of the Suga administration said the hospital system in the capital could avoid being overstretched if the number of new COVID-19 patients in the vulnerable older age groups declines, even if the overall figure increase.

“The coronavirus will become just an ordinary cold if it does not cause severe symptoms,” said a high-ranking official at the prime minister’s office.

The official indicated that the administration could sidestep the emergency issuance by citing the status of the health care system, one of factors that must be weighed before deciding on such a declaration.

However, such an approach would likely fuel criticism that the Suga administration is putting the Olympics above everything else, including the safety of the people it represents, in the pandemic.