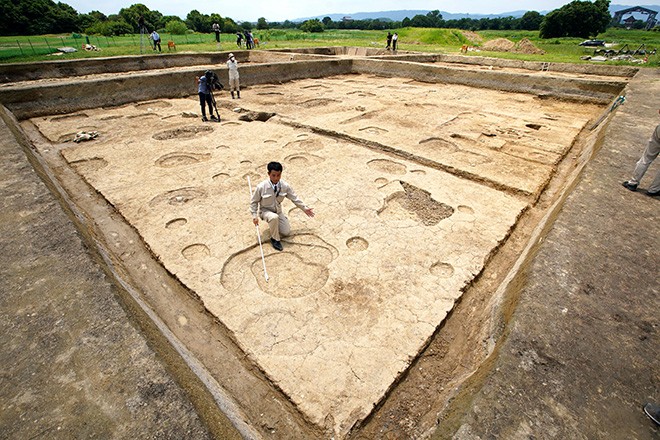 Remains of a structure unearthed at the former site of the Heijokyu palace in Nara. This photo was taken on June 30. (Takuya Tanabe)

NARA--Archaeologists have excavated one of the largest ruins of a building ever found at the former site of the Heijokyu palace in this ancient capital.

The Nara National Research Institute for Cultural Properties announced the findings at the government-designated special historic site on June 30.

It believes the structure was the center piece of a residence for emperors and crown princes during the late eighth century.

One expert said the building was likely a residence for female Emperor Koken (718-770).

Archaeologists began examining a roughly 924-square-meter plot in the northern Toin district in March, according to the institute. Toin is located in the eastern part of the Heijokyu palace, the nerve center of politics during the Nara Period (710-784).

They unearthed ruins of a rectangular-shaped structure, which spans 27 meters in an east-west direction and 12 meters in a north-south direction. Also found were 50 pits dug in the ground to place pillars into them. The holes are lined up about 3 meters apart.

The building, supported by pillars placed in a grid-like formation, likely served as a living space, according to the institute.

The researchers concluded that the structure stood there between 749 and 770 during the Nara Period, based on the characteristics of a pattern on roof tiles found in the pits.

During the building’s roughly 20-year lifespan, Koken ruled from 749 to 758 before abdicating in favor of Emperor Junnin. Koken, known to have favored a Buddhist monk named Dokyo, again ascended to the throne as Emperor Shotoku from 764 to 770.

“Shoku Nihongi,” the imperially commissioned history text on the Nara Period, notes that Emperor Shomu (701-756), father of Koken, resided in Toin when he was crown prince.

The area was later used as a site to build a residence for emperors.

“Koken particularly liked Toin, according to Shoku Nihongi,” said Akihiro Watanabe, a professor of Japanese ancient history at Nara University. “I believe the (discovered) structure was her living space.”

The institute said it plans to post a video of the ruins on its official YouTube channel in late July.