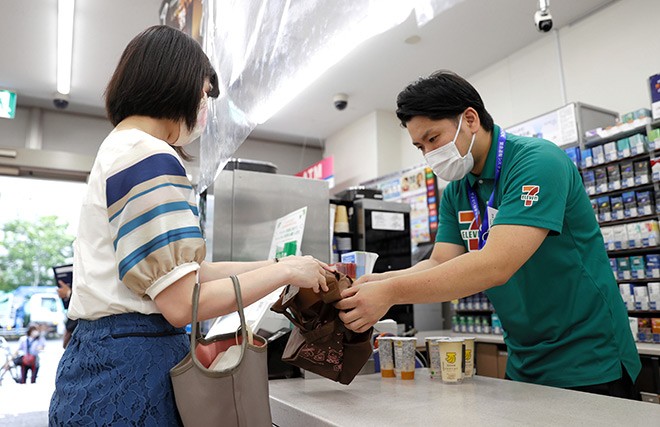 A shopper uses her own bag at a convenience store in Tokyo on July 1, 2020, when retailers began charging for plastic bags. (Asahi Shimbun file photo)

A year has now passed since plastic bags ceased to be available for free at storefronts.

There are still some occasions when I carelessly forget to bring my own eco bag with me. At the cashier counter, I have to choose with a pang of guilt between buying a large bag for 5 yen (4 cents) or a small bag for 3 yen.

The history of plastics dates to chemist Leo Baekeland (1863-1944), the son of a poor shoemaker, who successfully invented a synthetic resin in 1907. Bakelite--so went its trade name--was touted as one of the best materials available, and it brought him a vast fortune.

But its golden age was short-lived.

Around the 1960s, the word “plastic” started to take on a strong connotation of being a sham, fake and artificial. The oil crisis of the 1970s further tarnished the image of plastics, a product of petroleum, according to “Cultural History of Plastics,” a Japanese-language book by Toru Endo.

Concerns have been raised about pieces of plastic found in the stomachs of birds and deep-sea fish across the world’s oceans. In 2011, U.S. oceanographer Charles Moore sounded an alarm by drawing attention to a situation that he described as a “plastic soup” in the Pacific.

What started as a dream material is now perceived as harming the Earth’s environment. The public image of plastics has dramatically shifted from one extreme to the other.

Come to think of it, my view of plastic shopping bags has also done a near about-face.

I feel a crisis of conscience when I forget to bring an eco bag with me. I also have scruples about using plastic straws.

The list of such disposable items is only expected to grow longer.

A shocking estimate released five years ago said plastics in the oceans will outweigh all the fish combined by 2050.

I have no idea how much I am contributing to improving the state of the oceans littered with plastic soup. But I will never return to the days when I would nonchalantly receive plastic bags at storefronts.