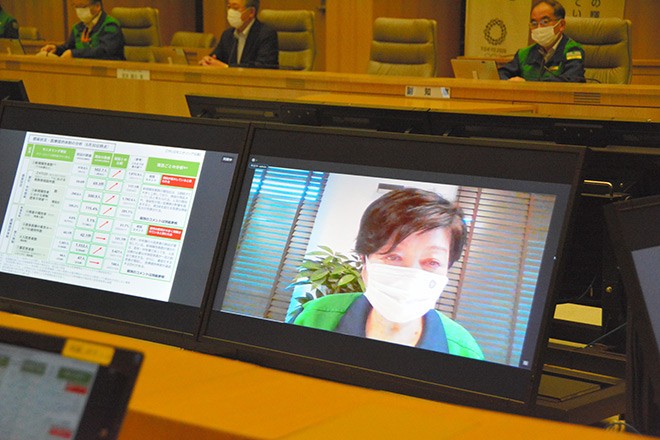 The novel coronavirus is now spreading in Tokyo at a faster pace than during the fourth wave of infections this spring, according to health experts, who called for tighter restrictions on alcohol-serving businesses.

The situation in the capital was discussed at a meeting on July 1 of a COVID-19 monitoring panel set up by the Tokyo metropolitan government.

The health experts on the panel urged the government to take swift measures to prevent the deteriorating virus situation from straining the medical care system again.

The panel found that at least two categories regarding the infection spread in the capital had reached the most serious stage 4.

Metropolitan government officials have said they would again ask bars and restaurants to stop serving alcohol if stage 4 levels were reached.

A figure of 25 or greater indicates stage 4 for this category.

The hospital bed usage rate for COVID-19 patients as of June 30 was 25 percent, which was still at the second highest stage 3 level.

Another finding presented at the meeting was that the daily average of new cases over a week had increased by 20 percent over the previous week. There have now been increases for three straight weeks.

The panel experts noted that pedestrian traffic around entertainment districts has risen in comparison to late March. That increase was their basis for warning about the quicker pace of new cases than during the fourth wave.

The panel presented a simulation on the situation in Tokyo if new COVID-19 cases continue to rise by more than 20 percent over the previous week. It showed that in four weeks, the daily number of new infections would exceed 1,043.

Atsushi Nishida, who heads the Research Center for Social Science and Medicine at the Tokyo Metropolitan Institute of Medical Science, reported that over the 10-day period after June 21, when the state of emergency was replaced by pre-emergency measures, nighttime pedestrian traffic around major entertainment districts increased by 21.5 percent.

Between 10 p.m. and midnight over that 10-day period, congestion still increased even though bars and restaurants are supposed to stop serving alcohol at 8 p.m.

Nishida said the late-night pedestrian traffic had already reached levels of late March when Tokyo entered the fourth wave of infections. He added that people who remained out until late at night were at greater risk of becoming infected.

Metropolitan and central government officials have already raised the possibility of issuing new requests for businesses to stop serving alcohol. But other officials said such calls may no longer be heeded, given the fatigue people are feeling from having to comply with such requests for more than a year.

Tokyo Governor Yuriko Koike took part in the meeting remotely, the first time she was seen in public since entering a hospital to rest from fatigue on June 22.