Suga not giving speeches for LDP candidates in Tokyo election 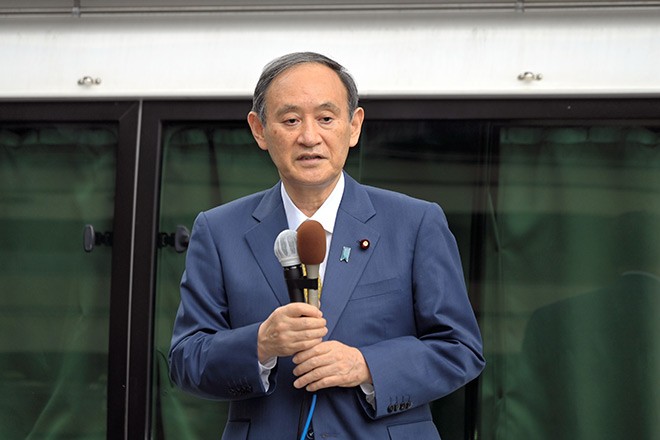 Prime Minister Yoshihide Suga, head of the Liberal Democratic Party, has only gripped a microphone once during the Tokyo metropolitan assembly election, on June 25, the day campaigning kicked off, in front of his party’s headquarters in Tokyo. (Takayuki Kakuno)

Prime Minister Yoshihide Suga, head of the Liberal Democratic Party, has held back from stumping for LDP candidates in the streets during the Tokyo metropolitan assembly election campaign as he slumps in the polls.

Suga’s absence has not gone unnoticed, as opposition party leaders have been delivering speeches to back candidates, while taking precautions against the novel coronavirus, ahead of the July 4 vote.

Natsuo Yamaguchi, head of the junior coalition partner, Komeito, Yukio Edano, leader of the Constitutional Democratic Party of Japan, and Kazuo Shii, leader of the Japanese Communist Party, have all hit the pavement to boost their candidates.

The ruling party said Suga has prioritized responding to the rise in novel coronavirus infections amid the ongoing health crisis, but some in the party are feeling uneasy about his absence in the election battle for the capital.

“His top priorities are his various duties (as prime minister), such as policy measures against COVID-19, and (whether he can go out to support candidates) will be decided based on his schedule, among other considerations,” Chief Cabinet Secretary Katsunobu Kato said during a July 1 news conference.

But the unofficial explanation is that the heat is too strong for Suga ahead of the Olympics.

“He has been criticized over holding the Olympics amid the COVID-19 pandemic,” one Cabinet minister said. “If he goes to support candidates at sites, he might draw criticism from the public.”

Suga only picked up a microphone on June 25, the day the election campaign kicked off, in front of LDP headquarters.

“Only LDP candidates, who actually know what’s happening on the ground, can (properly) implement policies,” he said in front of LDP members and staff.

But since that first appearance, his absence has been conspicuous.

Suga also held back from stumping for the party’s candidates in the three parliamentary elections in April, which the ruling LDP lost altogether.

“It is difficult to ask Suga to come and assist because he is in the line of fire over the Olympics,” a Lower House lawmaker from Tokyo said.

Suga has in the meantime grown concerned over how the Tokyo metropolitan assembly election campaign is developing and is working to dispatch Cabinet ministers to lend support to candidates, sources said.

This all comes as polls suggest Suga faces headwinds ahead of the upcoming Lower House election.

According to a poll conducted by The Asahi Shimbun on June 19 and 20, the prime minister's Cabinet approval rating has sunk to 34 percent, the lowest level since his administration was formed.

“If Suga stands on the streets for the campaign, people would jeer him,” another minister said. “If the candidate loses, Suga will also bear the responsibility.”

His defensive posture marks a stark departure from that of his predecessors.

According to an Asahi Shimbun analysis, former Prime Minister Shinzo Abe gave campaign speeches at least three times on behalf of candidates in the last Tokyo metropolitan assembly election in 2017. He also supported candidates on the street right after he returned from Europe for the Tokyo metropolitan assembly election in 2013.

For the 2009 election, then-Prime Minister Taro Aso made the unprecedented move of visiting all the campaign headquarters of candidates endorsed by the LDP before the campaign even started.

Political watchers see the 2021 Tokyo metropolitan assembly election as a prelude to the dissolution and election of the Lower House before fall.

Some LDP members are concerned over whether Suga, who has failed to make gains for the party in recent elections, can be a symbolic icon in the upcoming Lower House election.