JCP alone in not congratulating Beijing on CCP’s 100th birthday 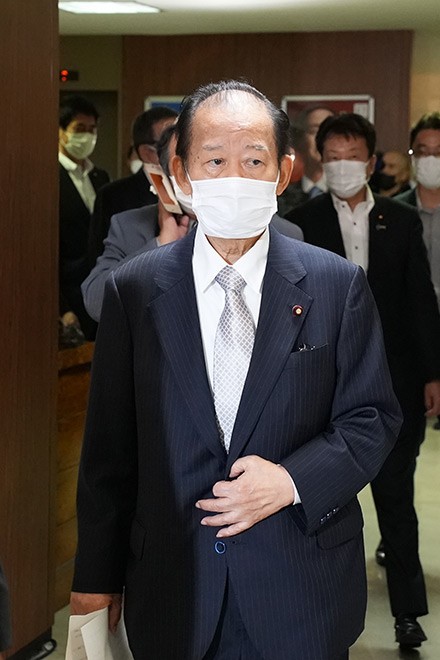 Toshihiro Nikai, secretary-general of the ruling Liberal Democratic Party, at the LDP’s headquarters in Tokyo on June 15 (Hiroki Endo)

Japan’s ruling and main opposition parties sent messages of congratulations to the CCP on the day.

But they said they did so for the sake of formality, amid strong concerns over Beijing’s stance toward Taiwan, as well as human rights and freedoms of ethnic minorities in China’s Xinjiang Uighur Autonomous Region and the people of Hong Kong.

“China’s activities in the East and South China seas to seek regional hegemony and human rights violations against people in Hong Kong and the Uighur (minority) have nothing to do with socialism,” he said in a message posted on his Twitter account on July 1. “It’s not worthy of the name of a communist party.”

Akira Koike, head of the JCP’s Secretariat, also tweeted the same day that the party did not send a congratulatory message to the CCP and has not received any request from Beijing to send one.

Toshihiro Nikai, secretary-general of the ruling Liberal Democratic Party, sent a congratulatory telegram to the CCP under his title, an LDP source said on July 1.

“It’s a common practice, so it would be strange not to send one,” Nikai was quoted as saying by the source.

“It’s not so common that a political party marks its 100th anniversary,” Natsuo Yamaguchi, leader of the LDP’s junior coalition partner, Komeito, told reporters in Tokyo the same day. “We hope the party will work harder to achieve global peace, development and stability.”

The main opposition Constitutional Democratic Party of Japan also sent its congratulations to the CCP under the name of its leader, Yukio Edano.

“I don’t think we can celebrate the occasion without having reservations under the current circumstances,” Edano said at a news conference on June 30.

But he added that the CDP’s International Department did prepare a customary congratulatory message.