Mitsubishi Electric president to step down over fake test data 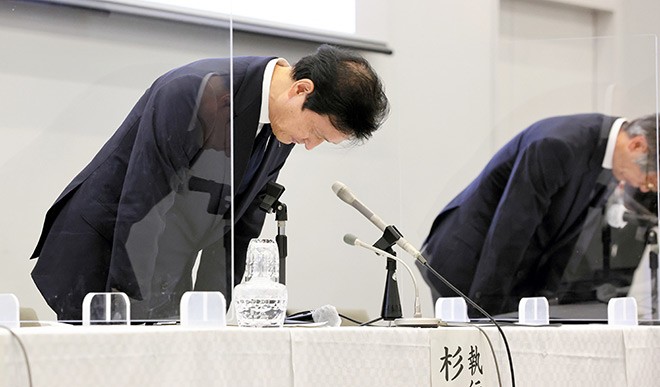 The president of Mitsubishi Electric Corp. announced on July 2 that he will resign to take responsibility for test data falsifications on equipment supplied to railway companies that may date back more than 30 years.

“We apologize for causing trouble to many people,” Takeshi Sugiyama, president of Mitsubishi Electric, said at a news conference on the afternoon of July 2.

It was the first news conference the company has held since the problem came to light on June 29.

Sugiyama said the company will launch an investigation into the deception by a committee headed by an outside lawyer and announce the results and measures to prevent a recurrence in September.

Mitsubishi Electric officials admitted to faking testing data when supplying train companies with air conditioning units and pneumatic devices used in braking systems and to operate the train doors. Both products are manufactured at the company's plant in Togitsu, Nagasaki Prefecture.

The company used different testing methods from those written in specifications by railway companies on a number of test items, including capability. It also created fake data and included it in test reports. The practice apparently began around 1985.

According to several sources, the company also created a computer program to crank out fake test data on air conditioning units it supplied to railway companies. Although no actual tests were conducted, the bogus data gave the appearance that they had been done.