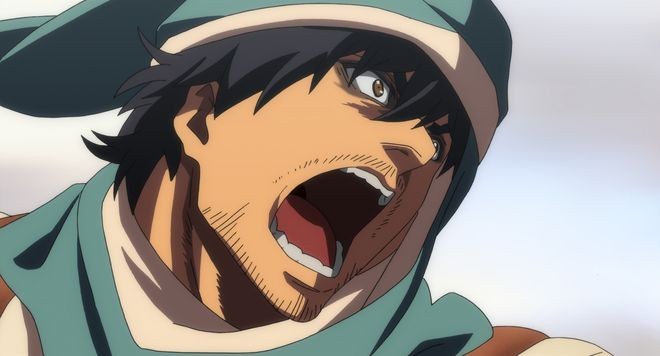 A scene from "The Journey" (Provided by Toei Animation Co.)

A joint anime production with Saudi Arabia now showing in Japan depicts an ancient war described in the Koran, Islam's most holy text, as an entertaining action adventure drama.

The story of "The Journey" revolves around a young man named Aws, who, with a companion, a onetime thief named Zurara, bands together with other allies to fight Abraha, who leads an army of elephants to attack Mecca.

The project's origins lie in Saudi Crown Prince Mohammed bin Salman's passion for Japanese anime and video games. Ten years ago, he invited Shinji Shimizu to Riyadh, the capital of the Middle East kingdom, to sound out the Toei Animation Co. producer about a possible collaboration.

The anime studio initially produced a TV series jointly with Manga Productions, a subsidiary of a foundation set up by bin Salman, before moving on to making Saudi Arabia's first animated feature film.

Atsuhiro Tomioka wrote the screenplay based on a plot comprising four stories from the Koran presented by the Saudi side. The movie reached fruition through the efforts of the Japanese production team led by director Kobun Shizuno.

Essam Bukhary, CEO of Manga Productions who acted as a producer for "The Journey," said the film has a distinct Saudi Arabian feel because it shows how the protagonist and the other characters overcome whatever hardships are thrown their way.

By coincidence, his impression seems to match the spirit of Toei Animation.

In one scene, Aws applies eye shadow given by his wife to gather courage before the final battle. The idea was the brainchild of a female Saudi Arabian staff member to express their love for each other and show that women get embroiled in a war, even if only indirectly.

Bukhary said that Manga Productions' mission is to nurture talent in the future, adding that Saudi Arabia is keen to understand the miracle of Japan's recovery to become a leading economic power after it was devastated during World War II.