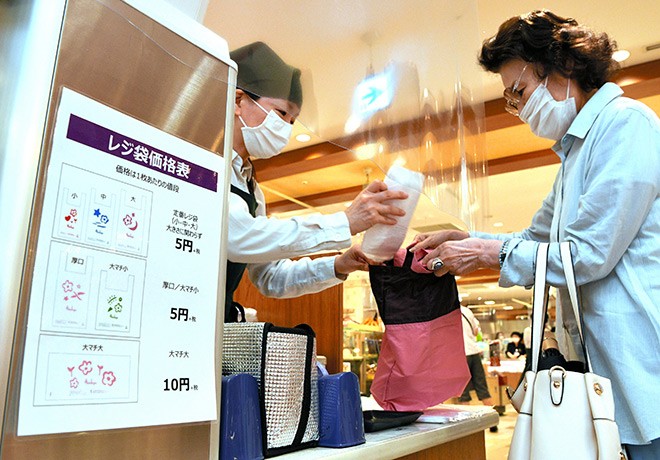 A shopper uses her own bag at a department store in Fukuoka on July 1, 2020, when retailers began charging for plastic bags. (Asahi Shimbun file photo)

A year has passed since Japan introduced mandatory charges to customers for each single-use plastic bag taken from retail stores.

The ratio of shoppers who decline plastic bags at stores has risen to 72 percent, up from 30 percent before the charge was introduced, according to the Environment Ministry.

The charge has dramatically changed shoppers’ behavior around checkout counters. It is now common for shoppers to place items they purchased into their own bags.

Much more needs to be done, however, to make a dent in Japan’s overall plastic waste, which amounts to 9 million or so tons annually. Plastic carrier bags account for much less than 10 percent of the total.

Japan is the world’s second-largest consumer of single-use plastic products on a per capita basis.

Greater efforts are needed to reduce plastic consumption as a whole and promote reuse. The government must work more closely with businesses and consumers in tackling the challenge.

Throwing away disposable plastic products means more than a simple waste of resources.

Plastic waste is causing serious pollution. It is estimated that by 2050 plastic trash in the oceans will outweigh all the fish combined.

In its strategy for promoting plastic recycling announced in 2019, the government set a target of reducing consumption of single-use plastic products by 25 percent and reusing or recycling 60 percent of plastic containers and packages by 2030.

Japan, which hosted the summit of Group of 20 countries in Osaka in June 2019, presided over an agreement that pledged to reduce the plastic waste flowing into the oceans to zero by 2050.

In June, the Diet enacted a law to promote recycling of plastic resources. The law calls on businesses to charge for single-use plastic products and switch to using alternative materials.

The government plans to recognize plastic products designed to reduce plastic use and promote plastic recycling with a logo to mark the change.

With the law scheduled to take effect as early as next spring, the government is compiling a list of products to be covered, such as single-use plastic straws, forks and hangers given away at stores.

It should draw on its knowledge obtained through the plastic bag charge program to work out specific measures that will lead to a significant reduction in plastic waste.

New attempts to tackle the problem are also emerging in the private sector.

In the Kanto region around Tokyo, a group of businesses that includes large companies started “Loop,” a sales system to reuse plastic containers for shampoo and other products.

The environmental group Greenpeace Japan rolled out a new service online, “Goodbye Waste,” a map that shows stores where shoppers can buy items without using single-use plastic containers or packages. More than 1,000 stores are registered.

There are ways for manufactures to support the cause. Makers of laundry detergent, for instance, can reduce packages and cut transportation and sales costs by developing tablet-type products.

There must be many other ways to reduce waste that are beneficial for both makers and consumers.

It is by no means easy to wean consumers off disposable plastic products so widely used in their daily lives.

Experts say sales of plastic bags have grown while the volume of plastic carrier bags supplied by stores for purchased items has declined.

Consumption of single-use plastic containers and wrappers is also said to have picked up due to increased demand for home delivery services stemming from the novel coronavirus pandemic.

It requires constant efforts to devise and improve measures to curtail waste and change people’s mindsets. The momentum of progress generated by the plastic bag charge should not be wasted.