Municipalities forced to suspend vaccinations due to dire shortage 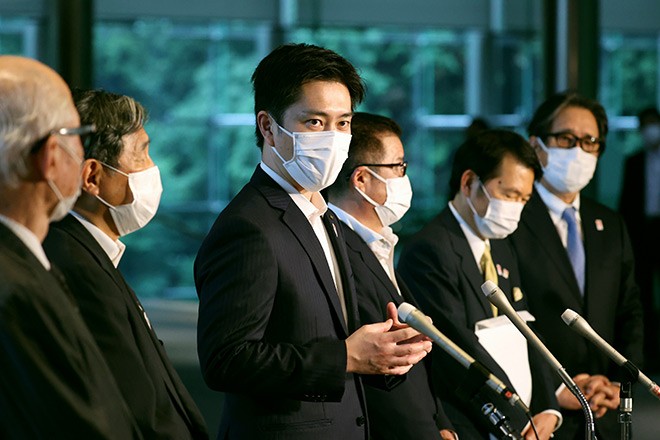 Already far behind many other countries, Japan's plans for a national rollout of COVID-19 vaccines--Prime Minister Yoshihide Suga's ace in the hole for pulling off the Tokyo Olympics this month--appear to be fast degenerating into yet another ill-conceived policy effort.

Suga set a goal of 1 million jabs a day, along with an expansion of vaccination programs to ones handled by the Self-Defense Forces, workplaces and universities.

Local government officials tried to comply with those moves, working hard to find locations and medical staff to carry out the task. The goal of 1 million shots was reached in June.

It now turns out that the rush to vaccinate may be behind a shortage of vaccine supplies from later this month.

Only about 30 percent of requests submitted by local governments for vaccines developed jointly by U.S. pharmaceutical company Pfizer Inc. and German biocommerce company BioNTech will likely be met in the two-week period from July 19, health ministry officials said.

That led local governments to temporarily suspend accepting reservations for vaccinations due to uncertainties about how many vaccine doses will be available.

The Osaka city government on July 2 decided to postpone the scheduled July 12 start of reservations for those 60 and older who have yet to receive a single jab.

Chiba city next to Tokyo decided to stop taking reservations for senior citizens 65 and older trying to get their first jabs.

Yamagata Mayor Takahiro Sato was clearly miffed with the central government over the confusion that has arisen.

“In compliance with the government's policy, medical care professionals and city government officials did their level best to expand the vaccination program,” Sato said June 23 when the decision was made to suspend reservations. “But now limits have arisen on the supply of vaccines. There is incredible confusion among those handling the vaccinations.”

In Osaka Prefecture, only about 80 percent of requests for vaccines from municipal authorities have been filled since June.

The figure is expected to fall to 55 percent for the period between July 5 and 18.

On July 2, Osaka Governor Hirofumi Yoshimura met with Taro Kono, the state minister coordinating the vaccination program at the central government level, and asked that prefectures that had been under a state of emergency due to the novel coronavirus pandemic be given priority for receiving vaccines.

A similar request was made to Kono and Norihisa Tamura, the health minister, the previous day by the governors of Tokyo and its three neighboring prefectures.

The Pfizer vaccine has been used to inoculate senior citizens aged 65 and older, the first group to receive jabs outside of medical care professionals.

But the central government also announced plans to allow shots to be administered at workplaces and universities from June 21. The vaccine developed by Moderna Inc. of the United States is being used for the workplace vaccinations.

Inundated with requests from companies and universities for vaccines, the Moderna supply of 50 million doses quickly ran out, leading the government to shift some of the Pfizer vaccines that would have been used by local governments at mass vaccination centers to the workplace program.

Health ministry officials said they had received requests for about 100 million Pfizer doses from local governments for June and July. But only around 60 million doses are available for that period.

Associates of Suga suggested that local governments may have to ask local residents in municipalities with a vaccine deficiency to wait longer than the normal three-week period before getting their second and final jab.