A landslide in the Izusan district of Atami, Shizuoka Prefecture, destroys homes and blocks roads on July 3. (Video footage by Yusuke Saito and Takaaki Fujino) 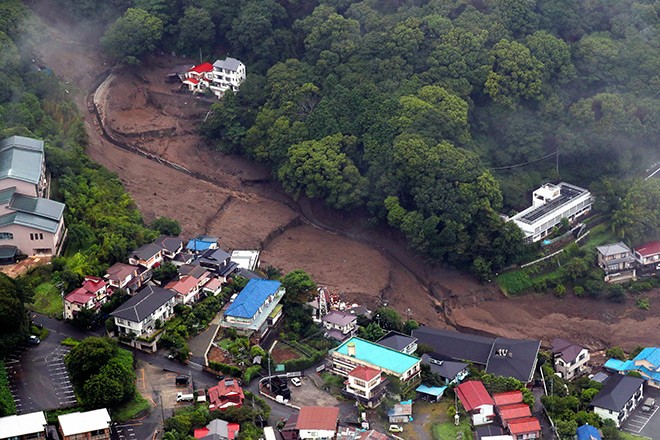 The area of Atami, Shizuoka Prefecture, hit by a landslide on July 3. (Ryo Ikeda)

Two people were killed and another 20 or so were missing in a landside triggered by heavy rains in Atami, a seaside resort town in Shizuoka Prefecture, on July 3.

Shizuoka Governor Heita Kawakatsu told a news conference that the two individuals were likely swept out to sea because the Japan Coast Guard found them. They were initially in a state of cardiac arrest.

Atami Mayor Sakae Saito said that between 100 and 300 households were likely affected by the landslide.

Prefectural authorities said a number of homes were destroyed and set up a task force to deal with the disaster. Thirty members of the Self-Defense Forces based in Gotenba in the prefecture were dispatched to assist in the rescue effort.

A resident in the area where the landslide hit said he saw a number of homes being engulfed by the landslide in the course of about 10 minutes. Some residents evacuated to the nearby MOA Museum of Art.

According to the Japan Meteorological Agency, 315 millimeters of rain was recorded in the 48-hour period until 12:40 p.m. on July 3 in Atami, far exceeding the average monthly rainfall for July of 242.5 mm.

Tens of thousands of residents were ordered to evacuate as torrential rains continued to lash the Kanto and Tokai regions, causing widespread flooding.

The Hiratsuka city government in Kanagawa Prefecture adjacent to Tokyo issued an evacuation order around 7:10 a.m. on July 3 due to fears the Kanamegawa river would burst its banks.

There were concerns that five other rivers might also overflow, so the evacuation order eventually covered about 200,000 people living near areas at risk of flooding.

Some local residents in the Matoi district of Hiratsuka awoke July 3 to find the water level above their knees. Cars were immobilized by the flooding.

A landslide around 8 a.m. near the Zushi interchange of the Yokohama-Yokosuka road in Kanagawa Prefecture overturned a car. A passenger was rescued and taken to hospital but is sufficiently stable to converse.

Evacuation orders were issued by 18 municipalities in Chiba Prefecture, also adjacent to Tokyo, by 9:30 a.m. on July 3. Prefectural government officials said at least five structures in Kujukuri and Narita in the prefecture were flooded as of 10:30 a.m.

Chiba prefectural police received an emergency call around midnight July 2 by an individual in Chiba city reporting that a company colleague had fallen into a river where water levels had risen. The two had gone drinking and were on their way home.

Evacuation orders were also issued in 15 municipalities in Shizuoka Prefecture.

According to the JMA, record rainfall over the 48-hour period until 9 a.m. on July 3 was observed at Mori, Shizuoka Prefecture, which received 475 millimeters, while Fuji and the Tenryu district of Hamamatsu in the same prefecture received 449.5 mm and 363.5 mm, respectively.

JMA officials were also cautioning residents in areas that have received heavy rainfall to be on their guard against landslides.

The agency is anticipating more rainfall until July 5 as the seasonal front moves northward toward the Sea of Japan.

For the 24-hour period until 6 a.m. on July 4, the agency forecast 150 mm of rain for the Tokai region, 120 mm for the Kanto-Koshin region and 100 mm for the Kinki and northern Kyushu regions.

The heavy rains disrupted Shinkansen and local train services in the Kanto region on the morning of July 3.

The swollen waters of the Kisegawa river damage a bridge, roads and homes in Shizuoka and Numazu cities on July 3. (Video footage by Takahiro Kumakura)