The first rescuers reach the site of a massive rain-triggered landslide that engulfed the Izusan district of Atami, Shizuoka Prefecture, on July 4. (Ryo Kato and Tsubasa Setoguchi) 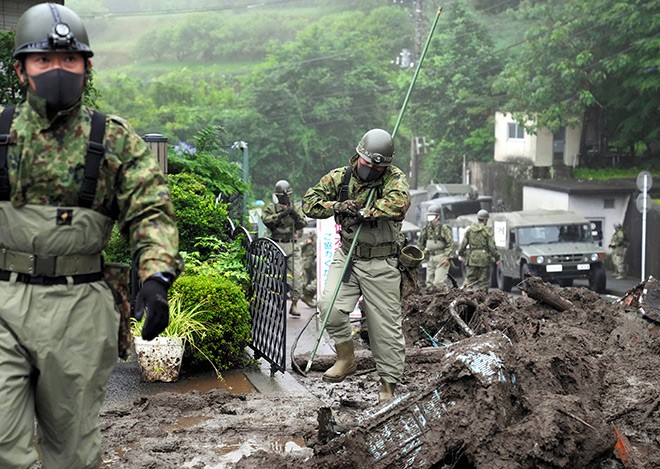 Members of the Self-Defense Forces on the morning of July 4 search for about 20 people missing in a massive landslide that hit Atami, Shizuoka Prefecture, the day before. (Ryo Kato)

ATAMI, Shizuoka Prefecture--Frantic rescue efforts resumed early July 4 as fears grew for 20 or so people missing after a massive landslide hit this renowned seaside resort town the day before.

Self-Defense Forces members were deployed to assist firefighters and police in the operation that got under way at 6 a.m.

Officials said that 700 or so members of the SDF, firefighting crews and police are working feverishly as they search through tons of mud and debris that crashed down on the Izusan district, a community built on steep mountainside overlooking the Pacific.

Atami, an easy train trip from Tokyo, is also famed as a hot spring resort.

Mayor Sakae Saito called on every person in the task force formed to deal with the disaster to do everything in their power to ride out the crisis.

“We need to prevent a secondary disaster, but the 72-hour window since yesterday is critical in terms of rescuing the missing people,” he said. “We also need to go full throttle to support the rescue operation by gathering information and responding to the needs of residents at evacuation centers.”

The landslide occurred around 10:30 a.m. on July 3, initially claiming the lives of two women.

According to local authorities, about 20 people remained unaccounted for, and at least 130 homes and buildings in the district were swept away or damaged.

Six men and four women were rescued on the evening of July 3.

As of 6 a.m., around 390 residents were staying at about 10 makeshift evacuation centers, city officials said.

Torrential rains are expected to continue in Shizuoka Prefecture, according to a forecast by the Japan Meteorological Agency, citing warm air flowing into a seasonal rain front and a low pressure system there. The rain front is responsible for the heavy downpours in the prefecture and the Kanto region.

The amount of rain in the prefecture has already far surpassed the average for the month of July, fueling fears that loosened soil at some locations could trigger more landslides.

The JMA called on residents to exercise utmost caution against possible landslides, flooding and overflowing rivers.

The seasonal rain front is expected to move northward toward the Sea of Japan side, broadening areas hit by rain until July 5. The JMA forecast heavy downpours in regions along the Sea of Japan.

For the following 24-hour period, 100-150 mm of rain is forecast in the Hokuriku, Tokai and Chugoku regions and 50-100 mm in the Kanto-Koshin and Kinki regions.