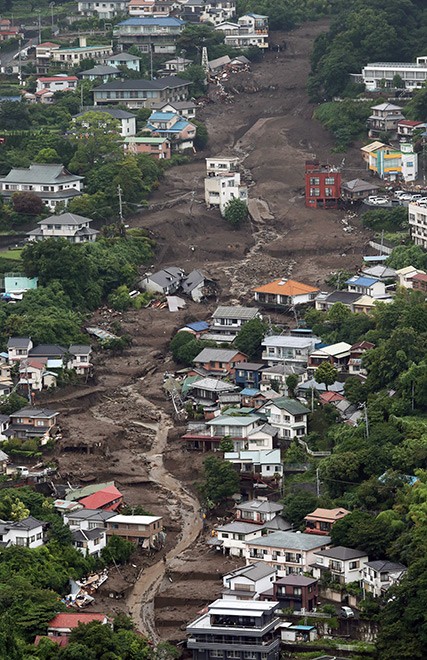 A view of the landslide destruction in the Izusan district of Atami, Shizuoka Prefecture, on July 4, a day after the disaster (Ryo Ikeda)

ATAMI, Shizuoka Prefecture--The disaster that befell this seaside resort town was an accident waiting to happen, say experts citing the steep mountainside on which it is built and poor soil quality due to huge ancient deposits of volcanic ash.

Heavy rains that battered the area since July 1 exacerbated an already precarious situation, resulting in a massive mudslide July 3 that sent torrents of mud, water and debris crashing into homes and buildings in the Izusan district, claiming the lives of two people initially and leaving around 20 others missing.

“The videos indicate that the mud and water flowed at a rate of 30 kph,” he said. “Under normal circumstances, mud flows are not that destructive. But on this occasion, the mudslide was between 4 and 5 meters high when it came, reaching the second floors of homes.”

The mountainside upon which Atami is built is susceptible to collapse, especially during torrential downpours and typhoons, as it is made up of vast deposits of volcanic ash and rocks that melted in an ancient volcanic eruption.

The seaside town in Shizuoka Prefecture, famed for its hot springs, is surrounded by group of volcanoes, including Mount Hakone, according to Susumu Yasuda, professor emeritus of geotechnical engineering at Tokyo Denki University.

A hazard map issued by the land ministry shows that Izusan and nearby communities are designated as areas in danger from collapse and landslides.

When the magnitude 7.9 Great Kanto Earthquake devastated Tokyo and surrounding areas in 1923, a large-scale mudslide occurred near the district, according to Yasuda.

The vulnerability of the rock and soil in Atami, coupled with heavy downpours since July 1, compounded the situation, experts said.

Total rainfall through 10:30 a.m. on July 3 came to a whopping 465 millimeters, according to a rain gauge set up in the Minaguchi district of Atami, which is located in the vicinity of Izusan.

As a result, the Izusan district and nearby areas faced a greater risk of landslides, given the recent heavy rainfall and vulnerability of the surface soil.