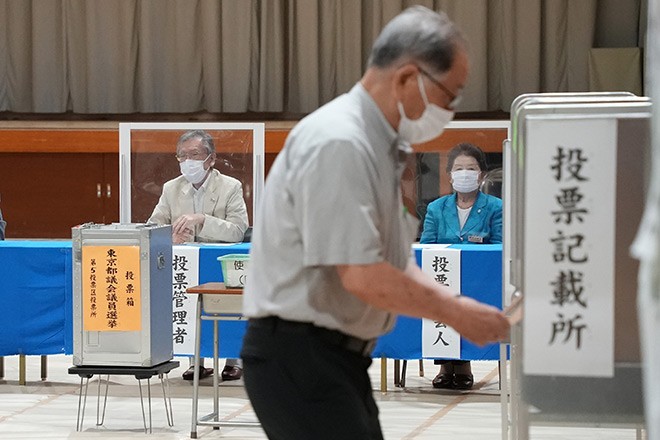 A voter casts his ballot in a polling station in the capital’s Chuo Ward for the Tokyo metropolitan assembly election on July 4 as election officials sit behind panels as protection against the novel coronavirus. (Hiroki Endo)

The ruling Liberal Democratic Party appeared set to emerge as the dominant party in the Tokyo metropolitan assembly election on July 4, but has no chance of capturing a majority--even with its junior coalition partner Komeito.

Together with Komeito, with which it forged an electoral alliance for this contest, the LDP aimed at capturing at least 64 of the 127 assembly seats.

But voters were clearly disenchanted with the two parties over delays in organizing a vaccine rollout in the capital despite resurgence of COVID-19 cases in recent weeks and the decision to go ahead with the Tokyo Olympics with spectators even while the health crisis continues to rage.

Tomin First no Kai (Tokyoites First), a regional party to which Tokyo Governor Yuriko Koike serves as special adviser, was losing steam and will likely lose its status as the leading party.

Tomin First no Kai pushed for holding the Games, already delayed by a year because of the pandemic, without spectators.

The Japanese Communist Party and Constitutional Democratic Party of Japan advocated either cancellation or another postponement of the Games, reflecting widespread concerns among the public about staging such a massive event at a critical time.

Even so, they were unable to thwart the LDP from returning as the dominant party.

Voter turnout was 42.41 percent, compared with 51.28 percent in the previous poll.

The LDP was dealt a humiliating blow in the 2017 election, with only 23 seats, the fewest for the party in any Tokyo metropolitan assembly election.

It fielded 60 candidates, more than any other party, to muster strength.

Prime Minister Yoshihide Suga described the assembly election as a “weighty one that has direct implications for an election at the national level.”

The crucial Lower House election must be held by autumn.

The aim for Komeito was retaining its pre-election strength of 23 seats. In the previous election, Komeito broke with the LDP and allied with Tomin First no Kai.

The LDP and Komeito pitched their response to the novel coronavirus crisis and vaccine rollout by the central government to lure voters.

Neither of them referred to the Games in their campaign platforms though they strongly backed staging the events from the outset.

As of midnight, the LDP had won 29 seats and Komeito 22 seats.

Forty-seven candidates from Tomin First no Kai entered the race, two more than its pre-election strength.

They campaigned on Koike’s record to bring in a metropolitan ordinance to prevent secondhand smoke and measures to reduce the number of children on waiting lists for child care services.

The candidates tried to woo voters with posters and fliers of them together with the governor, underscoring that the party is behind her all the way and they support her policies.

But these efforts failed to rally voters in sufficient numbers.