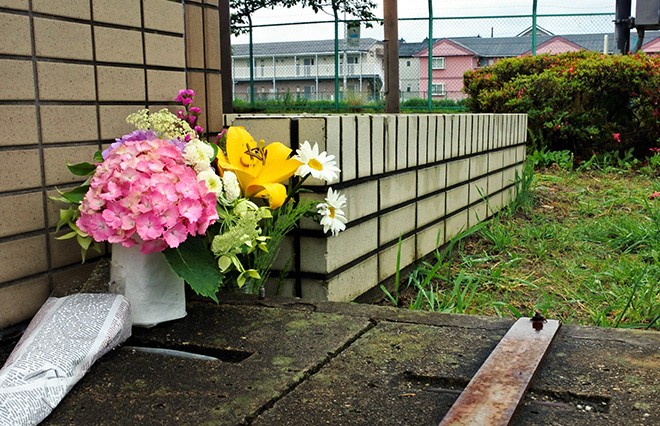 Flowers are offered by the side of a restroom in a park in Nishio, Aichi Prefecture, the site of the case in question. The baby boy was abandoned in shrubbery in the background. (Chika Yamamoto)

NISHIO, Aichi Prefecture--A city government employee made a grisly discovery in shrubbery in a park here on June 2 last year.

Inside a plastic bag was the body of a baby boy with an umbilical cord still attached. The mother, 21, was arrested four days later.

The woman, who has been found guilty of abandoning her newborn, told the court that she could not have an abortion because she could not get her male partner to sign a written consent form. However, no consent from the partner was legally required in the given case.

The tragic case highlights discrepancies and misconceptions on reproductive rights in Japan.

The Nagoya District Court’s Okazaki branch in May sentenced the woman, a former nursing school student who lives in Nishio, to three years in prison, suspended for five years.

The woman, who gave birth to the baby in a restroom in the park, was accused of causing his death by failing to provide appropriate care as well as abandoning his body.

According to her testimony during the court hearing and other information, she felt her lower body bleeding while she was on her way to school and walked into the restroom.

She testified she was only vaguely aware of what happened after she entered the restroom, and that the next thing she knew, she had given birth to the baby, who was already dead.

The woman’s mother was contacted by school officials and was told that her daughter had not come to school. She found her daughter in the restroom and took her to a hospital.

While her mother was away from the restroom, the woman put the baby’s body, which she had kept hidden, by the side of the shrubbery.

The woman contacted a classmate from her elementary school years, who fathered the baby, on social media as soon as she learned she was pregnant.

The couple decided they would have an abortion, and the classmate promised to sign a written consent form for an abortion as required by a doctor.

However, the woman fell out of contact with her classmate. She had to cancel appointments for an abortion twice because she did not have written consent signed by him.

The woman made inquiries with other hospitals to ask if she could have an abortion without written consent. She testified in court she was told that consent by both parties was required, and she ended up missing the period when she would have been allowed to have an abortion.

“The development leading up to the criminal act originated in the insufficient and insincere response taken by the father of the victim (the baby),” the court decision pointed out.

The Maternal Health Law allows an abortion to be performed in limited cases, including when the continuation of pregnancy or delivery is difficult due to bodily or economic reasons and when the pregnancy is the result of rape.

The law also provides that the doctor performing the abortion should obtain the consent of both the mother and her spouse, who may be a common-law partner.

An abortion can be performed without consent of the spouse in only three instances: when the spouse is dead, is not known, or cannot express an intention.

The law has no provision for the case of an unmarried mother without a spouse, but the health ministry said in 2013 that no consent is required in such a case.

The Nishio woman was unmarried, and her partner could not be reached. Health ministry officials told The Asahi Shimbun that in the case in question, a doctor would have been allowed to perform an abortion on the woman by her consent alone.

The woman testified, however, that she was called on to produce written consent.

“In many cases, doctors ask for written consent, which is not legally required, partly to guarantee payment and partly to avert the risk of being sued by the male partner after the abortion,” said Yukiko Saito, an associate professor of bioethics with Kitasato University, based on her interviews with obstetricians-gynecologists and other information.

An obstetrician-gynecologist, who works for a hospital in western Japan, said he collects written consent, just as a formality, although he knows there are exceptional cases where no consent is required.

“Doctors have no way to confirm if the circumstances of a pregnant woman constitute one of the exceptions provided in the Maternal Health Law,” he said.

In the wake of the Nishio case, International Safe Abortion Day Japan Project, an advocacy group that organizes researchers, midwives and others, released a four-point statement of requests for the central government.

The requests include one for giving the widest possible publicity to the fact that an unmarried woman is entitled to have an abortion without consent of her male partner, and another for abolishing the legal provision that obligates the consent of the spouse.

“We will work with medical associations, and associations of obstetricians and gynecologists, to better publicize concrete cases where no consent is required,” said an official with the health ministry’s Maternal and Child Health Division.

The spouse’s consent is required for an abortion in only 11 countries and regions, including Japan and Indonesia, according to Kumi Tsukahara, a part-time lecturer with Kanazawa University, who studies the issue of abortions.

(This article was compiled from reports by Chika Yamamoto and Etsuko Akuzawa.)