Tokyo-bound: Australia to send 472 athletes to the Olympics 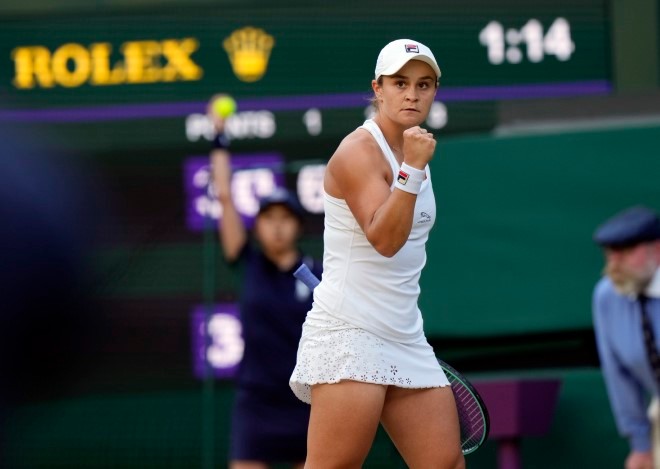 Australia’s Ashleigh Barty celebrates winning a point against Czech Republic’s Katerina Siniakova during the women’s singles third round match on day six of the Wimbledon Tennis Championships in London on July 3. (AP Photo)

SYDNEY--Australia will send 472 athletes to the Tokyo Olympics, the second-largest team sent overseas by the country since the 2004 Athens Games.

The Australian Olympic Committee said Monday that 254 women and 218 men would travel to Tokyo for the games which begin July 23. At Athens, Australia sent 482 athletes.

No. 1-ranked women's tennis player Ash Barty will be one of 16 Indigenous athletes on the Australian team.

The Australians will compete in 33 sports, including fielding athletes in four new Olympic sports--karate, skateboarding, sport climbing and surfing.

“This has been extremely difficult for every athlete and each has their own individual story to tell. But they have made it. Through their determination and commitment, they are going to Tokyo,” Chesterman said.

“The AOC has talked about not setting medal targets and placing unhelpful expectations on these athletes. Given the events of the past 18 months, this has been the correct path. Getting to the start line has been so difficult.”

The Australian team will have its highest-ever percentage of female athletes at the Olympics--53.5 percent, with the previous high 50.90 percent at Rio de Janeiro in 2016.

The team will also feature its oldest-ever Australian Olympic competitor--66-year-old Mary Hanna in equestrian (dressage). Equestrian Andrew Hoy, who competes in eventing, will be at his eighth Olympics.

Australia's biggest team will be athletics, with 63 competitors.