The site of a massive landslide triggered by heavy rains in Atami, Shizuoka Prefecture (Provided by Shizuoka prefectural government) 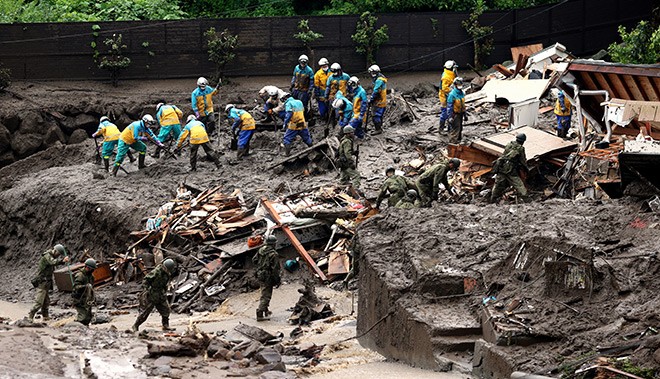 ATAMI, Shizuoka Prefecture--A third death has been confirmed in the massive landslide that barreled through this seaside resort town two days ago.

Atami city officials confirmed on July 5 the death of an elderly woman who was rescued from her collapsed home the day before.

It was located along the upper reaches of the Aizomegawa river that swept up slurries of mud and rocks and triggered a landslide on the morning of July 3.

Rescuers transported Chiyose Suzuki, 82, to a hospital, but she had sustained severe injuries and was pronounced dead in the afternoon.

Authorities are frantically racing to confirm the safety of dozens of people in the area as more torrential rains are expected in the region toward the evening.

Atami Mayor Sakae Saito said on July 5 that the city has yet to confirm the safety of 80 people.

Prime Minister Yoshihide Suga is vowing to continue an all-out effort on the search-and-rescue operation.

“Police, Self-Defense Forces, firefighters, the Japan Coast Guard and others are dedicating all their strength to rescue every person who has been left in the debris who needs help as soon as possible,” Suga told reporters at the prime minister’s office in Tokyo.

The central government has also set up a disaster countermeasures office headed by Suga.

Officials have used the registry of residents to confirm people’s safety. They are also checking evacuation centers and interviewing the heads of neighborhood organizations.

But the process of identifying the number of missing people is not easy because Atami is a cottage area.

The Shizuoka prefectural government is urging people who own a home in the disaster area but do not necessarily live there to contact their neighbors, or neighborhood association officials, to let them know they are safe.

Prefectural officials in the meantime have discerned that almost the entirety of a layered mound of dirt, situated at the uppermost portion of the river, had collapsed and poured into the river.

Shizuoka Governor Heita Kawakatsu has promised an investigation into how the mound was built and whether there is a correlation between land development work and the landslide.

Based on post-2010 survey data from the land ministry and other data that the prefectural government obtained in 2020, prefectural officials have estimated that the roughly 54,000 cubic-meter mound was built as part of development in the area.

The heavy rains had possibly ruptured and moved some 100,000 cubic meters of ground at the site of the mound, officials said.

The prefectural government released still and moving images on July 4, shot by a drone the evening before, that shows the landslide area in the Izusan district.

The video shows the rains had scooped out deep swaths of mountain slopes, exposing brown soil.

The site where the landslide occurred was the mound without trees, officials said.

Kawakatsu said building a mound like this can pose serious risks, and added the prefectural government will verify whether local land development work led to the landslide.