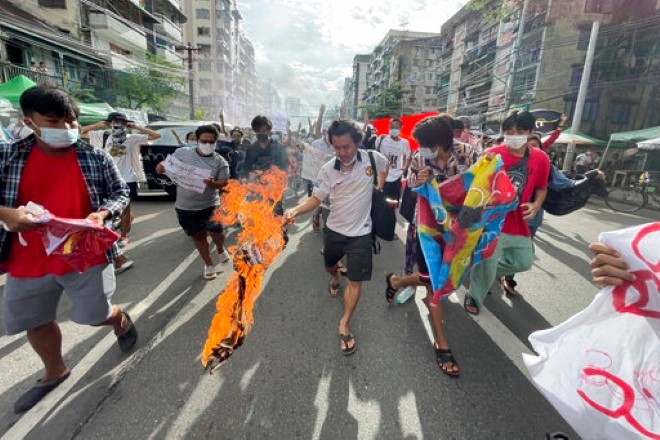 People protest against the February coup as they march in Mingalar Taung Nyunt township in Yangon, Myanmar, on July 3. (AP Photo)

Just a few months after Myanmar’s army seized power through a coup in February, military officers forced their way into the homes of a Japanese diplomat and a Japanese aid agency official, sources said.

In mid-April, the army searched the residences of a local Japanese embassy official and an official of the Japan International Cooperation Agency (JICA) in the country’s largest city, Yangon.

Japan’s Foreign Ministry protested the incursion by Myanmar’s military junta. At one point during the search, the men pointed their guns at the family, sources said.

The national army said it searched for “Myanmar people on wanted lists.”

A top ministry official believes “the search was not targeted at Japanese people,” and denies the incident will directly affect Japanese policy toward Myanmar.

However, the official added, “We decide on policy after considering various matters comprehensively, so this instance will be surely included in the evidence we examine and judge.”

According to Japanese government officials, late at night on April 17, multiple armed military officers and policemen searched the condominium building where a Japanese diplomat and a JICA official live.

They told the receptionist, a Myanmar national, that they came to search for Myanmar people wanted by the military government.

“We will submit our security camera footage to you, so please do not search,” the receptionist replied.

They then struck the employee and entered.

The doors of the residences where the Japanese nationals lived were locked, but the military used a master key to open them.

The diplomat met them at the entrance of the home, whereas the military officers stormed into the JICA official’s living room and pointed their guns at the residents.

In both cases, the military promptly left without harming anyone after determining the residents were Japanese citizens.

The Foreign Ministry protested that the Myanmar’s military’s actions had violated the Vienna Convention, which states that diplomats should be protected from harm and their residences should not be trespassed upon.

According to the ministry, Myanmar officials responded, “If this is true, it is regrettable. We will contact our security forces.”

Senior officials of the prime minister’s office view it as an incident that “accidentally occurred.”

A day before the search, supporters of the National League for Democracy, led by Aung San Suu Kyi, declared the establishment of a national unity government to oppose the national army, which had escalated tensions.

The military stepped up pressure on pro-democracy activists, and senior officials believe that this particular case occurred because some military officers had become agitated.

A day after the search, Japanese journalist Yuki Kitazumi was detained by security forces in Yangon.

The Japanese government has become increasingly frustrated with Myanmar’s army because it has ignored Japan’s requests to improve the situation.

Foreign Minister Toshimitsu Motegi revealed at a news conference on May 21 that the government is considering completely halting its official development assistance to Myanmar.

“If this situation continues, we will have to reconsider it,” Motegi said.

But according to sources from both countries, the Myanmar military government has become increasingly dissatisfied over development aid funding not being made by Japan.

Japan has already declared that it has stopped providing aid for new projects. But grant payments seem to have stopped even for projects continuing from before the Feb. 1 coup.

(This article was written by Makoto Oda and Makoto Igarashi, a senior international correspondent.)